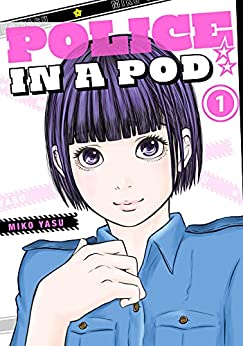 So… when I saw this manga/read the blurb, I thought this would be an interesting manga about police with maybe a dash of f/f… instead it was weird conversations, stilted/1-dimensional art, and a lot of unprofessional stuff.

Meet our MC, she is new to the police force and we see how she struggles through things. Thankfully, she has a very good-looking (in her words) chief to help her out and get her through things. At points this was a pretty interesting manga, seeing what kind of cases the police gets. See them meet with burglars, but also sex offenders, and old ladies ignoring stop-signs. All kinds of facets of the job pass by. From autopsy to traffic controlling to finding missing people. They do a lot of things despite being a small policebox.

Sadly, I sometimes just had to re-read as things just didn’t seem to flow right.

The conversations between these characters feel more like scripted than actually flowing naturally. Not to mention the conversations are just so weird at times. I mean, our MC is on patrol with her chief and she just randomly starts to talk about what happened in her youth and why she is not a fan of the police. She even makes constant comments on how the cops are horrible/steal/etc.. which had me very confused given that… she is a policewoman. And so there are more examples, like the girl who was abused and was told that our MC was a virgin (which let to a very weird letter from that girl) or the fact that none of the peeps at the station couldn’t help our MC write her report because she didn’t know a sex word. WTF? And so there are more conversations that just didn’t seem appropriate or just felt out of place.

The art. OH BOY. It was just so flat/stilted. At times it just looked like the characters were stuck on the pages without a care of dimensions, shadows, proportions, or anything. The faces were odd at times as well. I mean at one point the chief meets a guy from her graduate class, he became an ace and she became a policewoman in a police box. Her expression? Shock, with a tiny bit of a gasp. Which just didn’t fit the situation at all in my eyes.
Also WHAT was up with that chapter with the missing person? That was such a switch from the art we got the whole volume. And then it went back to normal a few pages after. WHY? While the art was not the best in this one either, it was a step up (though really, don’t look at the dog, don’t look at the dog), and I was sad we only got a few pages of it.

So yeah, will I continue reading? No. One volume was a struggle, not into struggling through more. I am still happy that the publisher gave me a chance to read it.