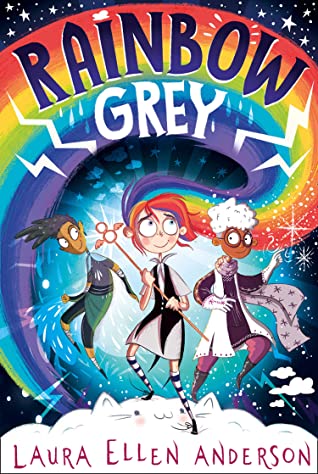 I was very very sad when Amelia Fang ended, but oh so excited when I heard that Laura Ellen Anderson was going to write a new series featuring weather, rainbows, and more!

Meet Ray Grey, yep, that is her normal name before her rainbow powers. She is a normal girl, well, very normal given that, unlike her friends, she doesn’t have any Weatherling power. She doesn’t mind though, instead spends time in the library when the others are honing their powers. I really liked Ray, she is a sweet and dedicated girl who is very motivated and doesn’t give up. I absolutely LOVED that she got rainbow powers and see her harness them, try to figure them out, try to make things work. I loved that she set her own path, and liked that we saw Earth through her eyes.
And I loved that she went from Ray Grey with grey hair to Rainbow Grey with awesome rainbow hair (which I definitely wanted).

I loved that the weather on Earth is controlled by Weatherlings in the sky. And that there are rogues who make bad storms and make bad things happen. Then again, that knicker-nado was just hilarious haha. I loved seeing how each Weatherling had their own thing, from Sunkeepers keeping the Sunflower in the sky in the right condition, to Droplett who is a Rain Weatherling and amazing with making puddles and teleporting using that. I loved finding out about the Rainbow Weatherlings/what happened to them/see what powers they have. I would have definitely liked some more school and some lessons. We only got on, and it just felt like it could have been more.

I loved Ray’s parents. Her father who spends most of his time on Earth as he has to protect it against the rogue weatherlings. Her mom who works with clouds and silver lining (yes, really).

Bonuspoints go to Nim the cutest and most explosive cloudcat in existence. I just loved that little fluff cloud and I had some laughs seeing his face on places you may not want your face to be (though I guess for a cat it is all perfect).

More bonuspoints to the bakery and the baked goods. ARGH, I want to try some now!

The whole, what do humans use this one for? I got a bit tired of that. I mean, I found the trope silly in Ariel when I was a kid, and I see it pop up at other times in other books and I just don’t like it. I mean, I can understand mermaids not being able to check what items are used for, but these are humans, in a way, just float around and check (because you are invisible while you are in the air) instead of being dumb and hang flipflops on your ear or eat the egg shells instead of what is inside. At one point Ray just put up a shower cap because she thought it was a hat????? Girl???

I just couldn’t take Snowden’s name serious. I am sorry, if I was a kid I would probably not even know, but as someone 18+ that name just was a distraction. I kept thinking of that other Snowden. XD

The book’s villain? I guess it right from the start. That sounds pretty bad, but that character was just acting a tad too suspicious and I was kind of hoping for a twist but no in the end it was them. They were a good villain though and I could also understand why they went down this path (well, at least partially, their other reason was just silly). I am glad with how things ended with this character,

The ending was amazing, full of rainbows, saving the forest, magic, and also a nice epilogue which made me want to grab the next book, only realising it isn’t out yet! ARGH! No!

The illustrations were again top quality and I love them so much. Love the character designs, and everything else as well. I do feel sad it was all black/white, it would have been so cool if there was at least a rainbow here or there. 😉

All in all, I will finish this review though I still got many feels, this was a magical book with magical characters and tons and tons of fun!