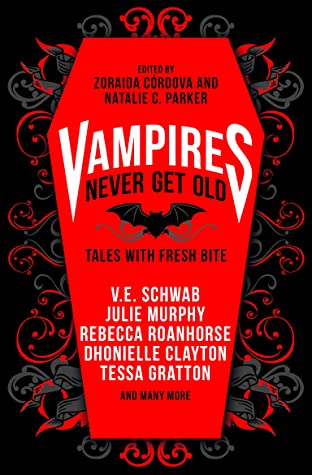 Various fun and exciting vampire tales with lots of LGBT representation that had me smiling!

This book features 11 fun and exciting stories about vampires. From more romantic ones to dramatic ones to very exciting ones. Some made me laugh, others made me feel sad. But in overall I really enjoyed the stories… well, except one. Haha. But 10 out of 11 is, for me, a very good result for an anthology. I have read anthologies which went from 1 to 5 stars with plenty of 2/3 stars. But this one actually has 10 stories that I would rate 4 and higher!

The only one I didn’t like was The Guide to Vampires, which was nice at first but then went on a bit too much about other things…. not my cup of tea. If it was just about being a vampire, a desi vampire at that, and food, and India, I would have loved it. But now I just got tired of things. Very fast. And I noticed I couldn’t enjoy the story any more.

I loved the extra notes at the end of each story written by the editrixes (love that word btw). With some extra information on vampires, on the story, and more. It really made for a fun addition and I found myself looking forward to them!

As for the other 10 stories, well, I wasn’t in the mood to write a long review, but I will write a short bit about the story along with a star-rating.

A fun idea, I love that you learn something new each day and then get closer to being a vampire, eventually you can choose on the seventh night if you want to or not which I love. It is not set in stone. You can walk away. I loved seeing our MC make decisions and see what she wanted.

Story 2: The Boys From Blood River by Rebecca Roanhorse:

This was GREAT. Spooky and mysterious. Playing a song made dangerous. The boys were creepy. I loved how our MC was trying to figure things out. He wanted to go away from the town and he was clearly swooning about the leader of the vampires, but what will he pick. This got very exciting at points!

I was a bit worried as Julie Murphy’s stories don’t always work for me but BOY I loved this one! A vampire slayer who finally isn’t your average vampire slayer in ways of how she looks (which I LOVED). What happens when she gets a vampire with a wish? A vampire who is very sexy? The ending had me giggling and squeeing. That was such a fun ending! Give me more!

Story 4: The Boy and the Bell by Heidi Heilig:

This was tons of fun and I quickly knew what was up with the boy. I mean monthly cramps? Mmmm. I loved that he was trying to become a doctor. I did feel sorry for him that he had to work so hard to get to where he wanted and even had to dig up people. It was quite interesting to see what happened next when he uncovered a vampire. Loved it!

Story 5: Well you know my feelings on that one. Haha. This is the Guide story.

Story 6: In Kind by Kayla Whaley:

A heartbreaking and at times quite sad story about a girl whose father decides to help her out of her suffering. Yep… Thankfully Grace meets Seanan, or well, Seanan finds Grace. I felt so sorry for Grace and wanted to give her a big hug. I have to say while it was sad, this one gave a new twist to the vampire story. Most stories for vampires state that if you become a vampire everything is fixed, but here we see that not everything gets fixed. The ending and the decision Grace took, WOW.

In ways a good story. But at times I was just shaking my head at the stupidity of Theo. I mean, hello???? If I found out that people at my party were vampires? I would have casually gone outside, haha. Or called for help. Either way, not just stick around and hide in a toilet. I really liked Brittany and learning more about who she is and how old she is. The ending had me both sad and smiling.

This was a pretty interesting story, I really liked Jude and her relationship with the wild animals in the zoo. It saddened me that this future also holds no water, that people (and animals) are dying due to thirst. It was quite interesting to learn more about Jude and what happened to her. But I found the ending a tad lacklustre and feel it could have been more.

Yep, it is a 4 star run. Haha. I am not sure how I felt about it. I mean I loved the blog format, but why would you post such things on the internet, publicly. Haha, it just seems odd. But I did like seeing the comments and also had a laugh how people reacted to the story. I wasn’t a fan of the parents, they were just a bit too much for me and I would have rather seen them talk with their son. The ending though was very good and it made me smile.

Story 10: The House of Black Sapphires by Dhonielle Clayton:

A bit slow at times, but I did like the story and I love the idea of finding your Eternal Love! I also loved that this one took place in New Orleans. And that the girls/their mother had a special store with all sorts of potions and elixirs that all sound magical. I love that each of the girls had a special talent! I also love the shadow barons (interesting to see what their job is), the ball was fun (so much magic), but I would have liked to see the ending a bit more expanded. Because now it felt like the amount of pages was reached but the story wasn’t done.

I really enjoyed this one! We see both the vampire and the vampire slayer and that made for a fun read. Especially since both of them were attracted to each other and it was interesting to see how that works out for them (hint, not so well, sadly). I loved the title and also see what it meant for both girls. Because for both of them that first kill is important. I would definitely like this one to be expanded in a full story.

As you can see, a very good anthology and I would highly recommend it to all! Be sure to check this one out!

2 thoughts on “Review for Vampires Never Get Old”