Welcome all to a new Waiting on Wednesday! This week I am eagerly waiting for Indigo Wilde and the Creatures at Jellybean Crescent by Pippa Curnick!

I recently saw a review for this one on one of the book blogs I follow and I just fell in love with the book! The story sounds magical and fun and I just love the idea of people who house magical monsters and take care of them (and the chaos that happens when a new resident arrives who disappears)! Plus, something I totally fell in love with and which is pretty rare, the book is all in colour! That is right, not black or white or just a few shades of colour, full colour!

Now I am just hoping that Amazon gets it back in stock soon, as I really want this book… now! 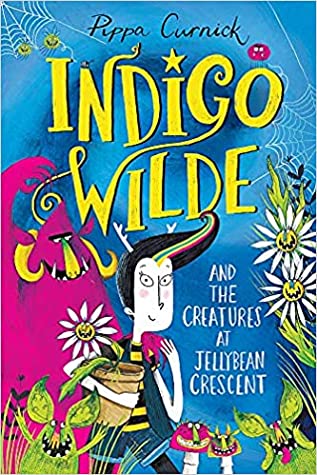 Enter the colourful world of Indigo Wilde and the magical creatures who live at Jellybean Crescent. When a highly dangerous new arrival goes missing, the race is on to catch it before disaster strikes … A wonderfully wild new series for readers of 7+ and fans of Pippi Longstocking and Amelia Fang.
Discovered in the Unknown Wilderness when she was just a baby, Indigo Wilde was adopted by World-Famous Explorers, Philomena and Bertram, who are always off adventuring.
Home for Indigo and her little brother, Quigley, is 47 Jellybean Crescent, a crazy and colourful house full of magical creatures that her parents have taken in over the years. There’s Fishkins, a purrmaid – half-cat, half-fish, and ALWAYS grumpy; Graham, a llama-corn with a particular taste for tinsel; Olli and Umpf – bright pink and blue yetis who can’t blend in to the snow, and that’s to name just a few of the creatures.
And now Indigo’s parents have sent another Monster Mail delivery to Indigo and Quigley. But this time, the box is empty, and the escaped creature is running rampage around the house. The race is on to catch the creature before it’s too late …
First in a new series by Pippa Curnick, this is gorgeously illustrated in full colour throughout.