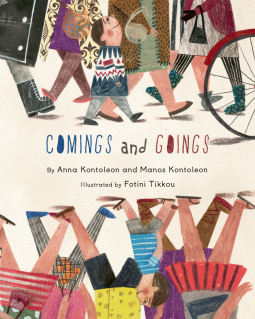 I received this book from Netgalley in exchange of an honest book.

I saw this fun looking book (love how things are mirrored on the cover, if that makes sense) and just had to request it. I was curious about Alex and his family.

This book is split up in two. On the left we have the story from Alex POV, on the other we have one of the family members. While I do appreciate that this was done, and also a nice nudge to the cover which also shows dual POVs, it was confusing. As I was into Alex POV and we would switch to one of his family, and it definitely didn’t help one of his family members is called Alexia. Haha. I think maybe it would have worked better if instead of having the WHOLE family talk on the right just pick one. That would still be a tad confusing, but less. Because now we have Alex, then one of the twins, then Alex, then the uncle, then Alex, then grandma or grandpa, then we have Alex, then we have the aunt, and so on. It also didn’t help that the art is continued on the next page, you really don’t think you will get two POVs. I just checked my copy again (read it on my phone yesterday) and apparently there are little things in the top/bottom to mark where we are now, but I feel those are either overlooked, or depending on the format just disappear all together. Given that I didn’t see them on my phone.

But the story itself, in between the chaos and confusion, was fun. I did like seeing what Alex did to prepare for the big flight and the big vacation. We see him tick of the days, get packing, buy presents, and more. And on the other side we see his family do their best to have Alex have one of the best vacations ever. Uncle Mike wants to do all sorts of fun things so Alex will remember him, Sam and Tina got big plans. Everyone is eager and I was delighted that Alex had such a big family that cared for each other.

I loved the ending (it was very sweet) and I was so proud of Alex to step into the plane by himself (of course, with someone to guide him, but I will still see it as travelling alone as none of his family is with him). Though I love the ending, I would have loved to see it expanded just a bit more. Maybe just a day of Alex vacation to finish it?

The art was one of my favourite things of the book, it was such a nice style.

All in all, despite being confused at times, I did enjoy the book!