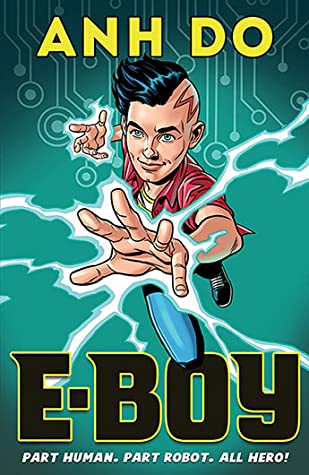 A lightning strike will change this boy’s life. But will it be for the better? Will he be able to control his new powers?

A new series by Anh Do, the writer who also writes the Ninja Kid-series. I was a bit worried, would I like this book? Would I hate it? The art was fancy, but so so so not my style. After seeing it around 3 times (1 time book store, 2 times library) I decided to just go for it. Try it. See if it would work. And I am happy I took the plunge because it was well-written and I flew through the pages.

In this story we have a boy who has to have a big operation, things seem to go fine.. until lightning strikes (what is this Frankenstein?) and it changes Ethan. From a boy always ill but with a big will to live he goes to superhacker. We also have the robot who was operating on Ethan, well… the humans want to use him for something else and that just broke my heart. I mean, he is a robot, but we can see he is also (what a surprise, not) developing something of a conscious or is trying to. I have to say that Ethan’s parts were more interesting to read for me (the hacking parts are done so well), I am just not a big robot fan, especially not when it is used as a terminator. Ethan though… for most he was a good kid, but at times I found him a big fat spoiled and unthankful brat. Most of this was due to the lightning strike that altered his brain, and thankfully he often saw that he was wrong/overdid it, and so he says sorry. I love an MC who can see his faults.

The story is quite exciting and only gets more and more exciting with each hack that Ethan does. He goes deeper, further, and does way more than in the beginning. I keep on wondering when things will go wrong, if they go wrong. The ending was also good, well up to the last page XD. The fight and what Ethan did in the end were fab, I was definitely very into the book at this moment. I am not sure how I feel about the open ending. I get that this is a series and so you know you want to leave things open, but for me it felt like the book abruptly ended.

The art, while good, wasn’t really my style. It was just too action and too tight lines. Give me cute, give me pretty, give me fancy, give me cartoony. That is also a big reason why I didn’t take the book in the first place. The art really put me off.

I am not sure if I will read the next book in the series. For now I am unsure. The book was fun, but I am just not into action books that much. I wish I could teleport back into time, because me in her Hardy Boys phase would have devoured these books. Wouldn’t even have minded the art!