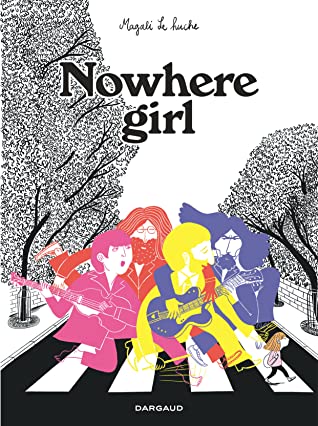 So, this book sounded interesting. I have read some other memoirs in graphic novel form, so I was eager to read this one. But in the end… it just wasn’t my cup of tea and despite this being just 120 pages… it took me quite some time to get through it. This was for various reasons:

-The cramped style. At times there was just SO MUCH happening and things going left to right and back and forth that I had to reread to make sure that what I read was correct.
-The font. I get it authors/illustrators, curly fonts are shiny. Hand-written fonts are pretty. But please, just don’t. I had such a hard time reading the font, I even had to up the size from 100% to 150% to read it.. but due to how blurry the font at 100% was, you can imagine that at 150% it only worsened. Sure, I could read it slightly better, but at the same time not. Haha. The dialogues especially, I found myself sometimes just skipping it to save my eyes.
-The girl. I get that she has mental issues and they were well-written from what I could see, but at times I was just so frustrated with her. Her obsession with the Beatles just got WAY WAY to much. To the point that she was thinking of sabotaging things, ripped posters of walls, and went into mean conversations with others because heaven forbid they like something else. I even felt sorry for the mom who tried her best and got chewed out because she had a different music taste and so when she was 18 in the time the Beatleas were big she never cared about them. Her daughter was FURIOUS and I found that ridiculous.
-Also how did that toilet not flood? What kind of magical toilet is that? And how did mom not notice the lack of underwear?

There were things I liked, I loved that the girl was, eventually at least, taken serious for her school anxiety. Things were really not going well and I am happy that her parents accepted it and even helped her out. And later when some time has passed and a new year arrives they looked for something fun that fits her but still is school.
I am also glad to see therapy sessions, happy that she was able to talk to someone about her problems and I loved that the therapist wasn’t pushing too much. Sometimes that happens, I know all about that. So I love that she let Magali draw, let her do her think and just ask some questions here and there.
The artstyle was quite nice though, yes, I know this is supposed to be positive, at times I just wish it had stayed with the minimalist colours that it had throughout the book. Because sometimes we would go into Beatles mode and BOOM COLOURS. I loved the bursts of colour, but it was also jarring.

All in all, while there were good things, the not so good things really took over. With a font that was hard to read that I just wanted to stop reading. A girl who just was so obsessed to the point of NOPE…