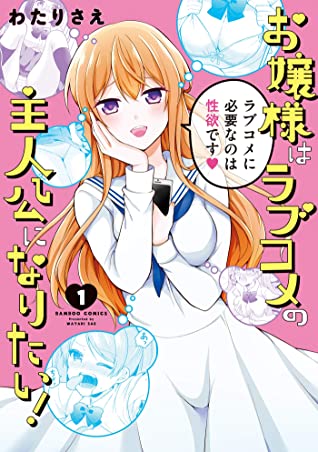 A hilarious F/F manga about a girl who loves very sexy/ecchi harem manga and who wants those things to happen to her.

I had such a big laugh at her reactions when things started happening. Like her bumping into someone and groping boobs. Or when she fell of the stairs and someone caught her, of course in full ecchi harem manga style. It was totally hilarious and I laughed so much. Especially in the beginning when things just happened spontaneously.

I am not sure how I felt about her trying harem stuff for herself, like hiding in a closet and peeking at girls. As I said, I liked the spontaneity of harem things happening, but her initiating it herself just didn’t sit right. So I hope in the next volume she goes back to just hoping something happens.

What I think is even more hilarious is the fact that this girl is totally OBLIVIOUS to what is going on around her. She has several people interested in her and she doesn’t know. Yep, it is just like your standard harem protagonist. Dense. But for once I didn’t mind it that much, maybe because for once it was a girl and not a boy.

There is a lot more happening including a school president with ideas for a lily garden of her own. I hadn’t expected that one, but it sure explains some of the rules now. Haha.

The art was really pretty though I wasn’t such a fan of the school uniform design. I mean those dresses don’t look comfy.

I would recommend this one and I will keep on reading~