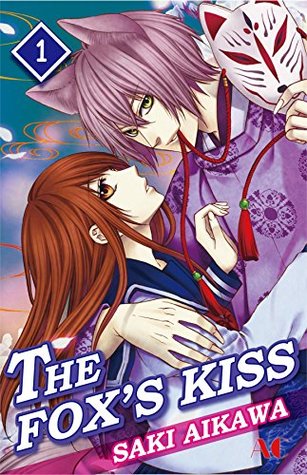 A bit of a mixed bag for me. I am happy I had the chance to read, but I had hoped it was better. I probably won’t be reading the second volume in the series.

Since I am tired/busy/very tired, I have written a good/not so good review featuring all the reasons why I wasn’t a fan or why I was a fan.

OK/GOOD:
😊After the initial eh feelings toward the girl I started to like her more and more. She is a sweet girl who likes helping out people. She doesn’t care if it is an enemy, like the senpai, or good, like the demons she meets. I am also happy that she often stood her ground against Iori and how he acts around her.
😊The demons and their many forms. From oni to gods to foxes to lions, we encounter quite a few different kinds in this manga. I am curious what more demons they will encounter.
😊The artstyle, while it was very samey at points, I also really liked the style and found the eyes especially well done and pretty.
😊The healing powers. Especially since it is used on demons. Something many people may not see as good.
😊I really love the cover!

NOT A FAN:
😬I wasn’t a fan of the girl, at least not at first. How she acted towards her grandma, treating her like she was crazy/weird. And then when her grandma is buried totally not caring and even being bored. WOW….
😬The story was just weirdly choppy at times. I mean, one time she was out with her senpai and the next page we see her bound on a strange place. I really was scratching my head there. There were other parts that just went from x to a in one step. Like the battle with the girl from the shrine, I would have liked a bit more detail on that.
😬How we went from him being rude and mean and calling her a servant and causing all sorts of problems to him declaring she will be his bride… and this was just in one chapter. WTF? That really came out of nowhere and I would have loved to see that written better, more natural. Or well, as natural as you can get with a demonxhuman story. Haha.
😬The engagement ritual itself. Forcing a kiss… sleeping together in one bed.. mark on your body. Wow, consent anyone? Even later he keeps sleeping next to her despite her saying no. She wants privacy and he is all like, oh but we are engaged, no need to be ashamed. Bro, no.
😬I am guessing we are getting a love triangle between Senpai and our fox boy? OH LORD. I am not in for that. Everyone who knows me knows that I HATE love triangles.
😬It was funny (and by that I mean hilariously nope) how both our fox boy and our MC just looked SO SO much like other characters from manga.
😬I would have liked to know more about her powers and why they were just now developing and why grandma didn’t at least leave something behind to help out. She could have known that maybe her granddaughter would get her skills.
😬I did find chapter 3/4 a bit weird, given how she suddenly cares SO SO much about Iori. I mean, she doesn’t want him dead of course, but how emotional she acted stood out to me, especially given she generally feels neutral/frustrated with Iori. I think it would have been better had it been toned down a bit, or maybe had this chapter take place much later in the story. When their connection feels a bit more real.