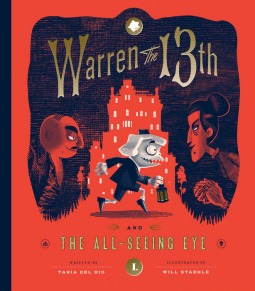 A delightful fun and magical book about a boy named Warren the 13th and the hotel his family runs. I had so much fun reading this one~

I have had this book on my Want-To-Read shelves for a while now and finally decided to just buy it! And then of course I had to read it as soon as I could because it was calling me. I was in for a book featuring mystery, fantasy. This book was a big surprise, a good surprise, and now I definitely want more. Sadly, Amazon doesn’t have the second book in stock (what is new given how they are the past year), but hopefully one day I can read it further.

Meet Warren, or Warren the 13th. The 13th Warren in a long line of great men who run a fabulous hotel. Sadly, Warren’s father died and since he was too young to run the hotel his uncle does it for him… well, we quickly see that the uncle is just useless. He would rather laze around, calls Warren if he has lost something or wants something, and so on. I felt for Warren. He has no parents, a useless uncle, a mean aunt, and oh yes, the gorgeous hotel? It is in shambles. Yes, Warren tries his hardest to keep everything as tidy as he can, repair things left and right, but he is so young and so tiny, he cannot do everything. I loved that Warren never gave up. Even when the story later gets more scary and hairier and stranger. He keeps on going. He is dedicated to this lineage and the hotel. Many kids would have given up but not Warren.

There are also other characters and I wasn’t always a fan of them! But that is logical, some of these are villains (the aunt was definitely the worst, what a character). Petula took a bit to get used to, I knew what/who she was and so I couldn’t trust her easily. But there are twists to her character that I hadn’t seen coming and I love it. I also really like the people who still work at the hotel, like the cook who always made sure that Warren got some good food in him and also donated plenty of cookies (which I desperately want to try) to him.

The All-Seeing Eye is the big focal point in the book. What it is? No one knows. Not even Warren as his parents died too young to tell him. I had fun going along on the hunt for the Eye and I was HIGHLY curious as to what the eye was. Would it be a gem? A jewel? Another kind of treasure? Something more sentimental? I was eager to find out and I loved the hints we got. I do have to say I was utterly surprised at to what it was in the end! I definitely hadn’t expected something called that to be that. WOW.

The whole book also reminded me of The Unfortunate Events by Lemony Snicket. The style of writing, the characters, the strangeness of it all. I LOVE it.

The art is fantastic and all adds to the atmosphere of the book and the mysteriousness of it all.

I would HIGHLY recommend this book to all. This was fantastic and I just flew right through it. Magic, villains, and so much more.