A hot welcome to the Excerpt Blog Tour for Hitched to the Gunslinger by Michelle McLean!! I am so so happy I can be part of this tour as this book is on my list to be read, it sounds fun and romantic and I want to see these two get together for real!

For today’s post I got some teasers, an excerpt, and of course author/book information! 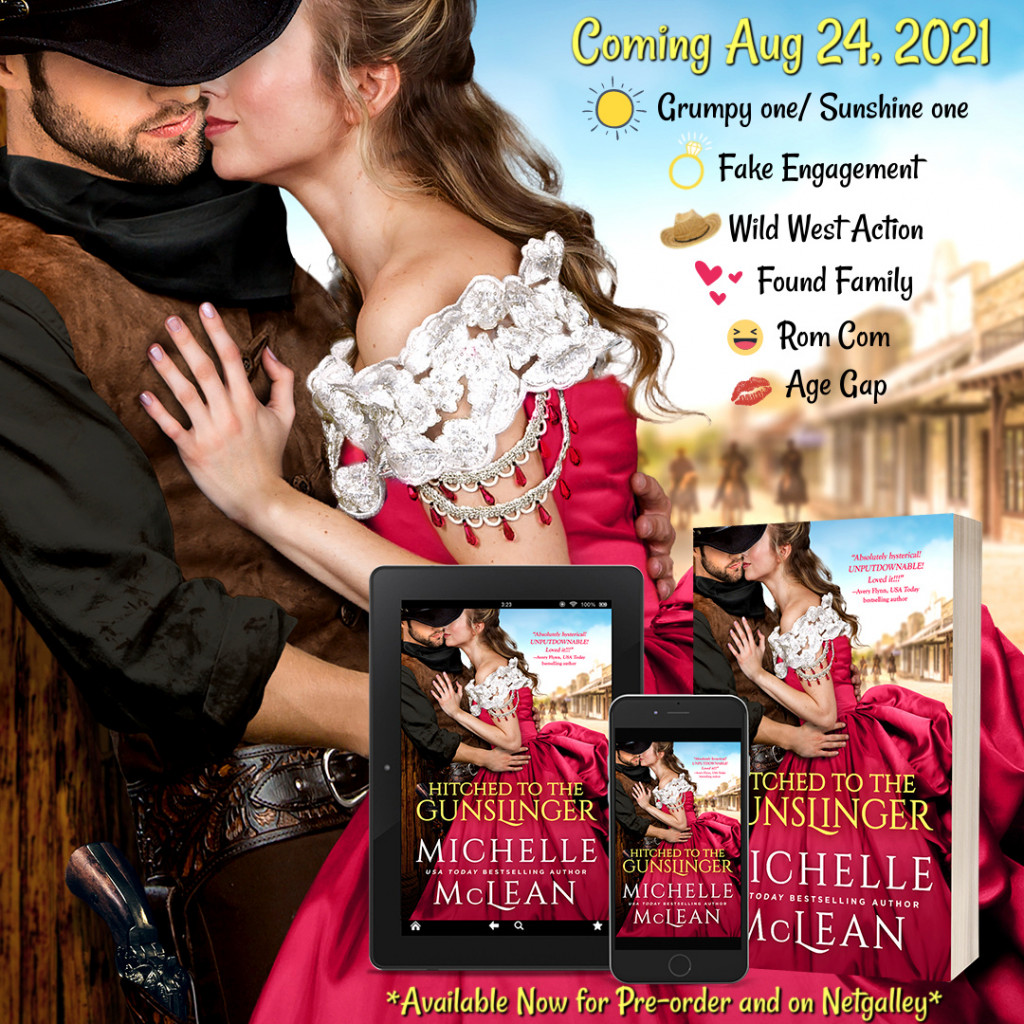 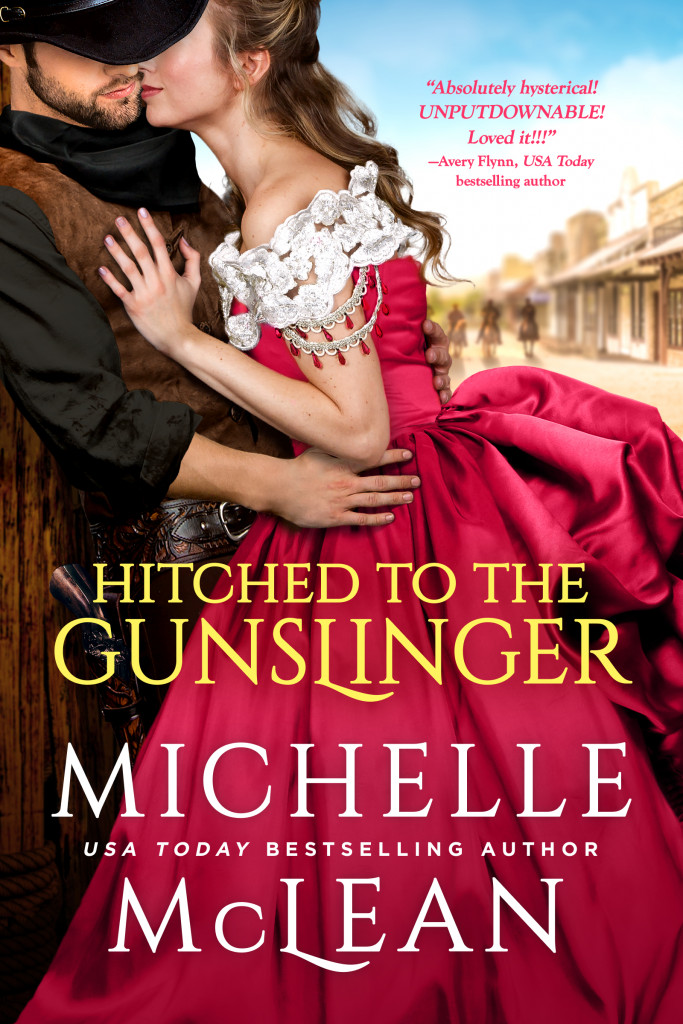 Gray “Quick Shot” Woodson is the fastest gun west of the Mississippi. Unfortunately, he’s ready to hang up his hat. Sure, being notorious has its perks. But the nomadic lifestyle—and people always tryin’ to kill you—gets old real fast.
Now he just wants to find a place to retire so he can spend his days the way the good Lord intended. Staring at the sunset. And napping.
When his stubborn horse drags him into a hole-in-the-wall town called Desolation, something about the place calls to Gray, and he figures he might actually have a shot at a sleepy retirement.
His optimism lasts about a minute and a half.
Soon he finds himself embroiled in a town vendetta and married to a woman named Mercy. Who, judging by her aggravating personality, doesn’t know the meaning of her own name. In fact, she’s downright impossible.
But dang it if his wife isn’t irresistible. If only she’d stop trying to steal his guns to go after the bad guys herself.
There goes his peace and quiet…

USA Today bestselling author Michelle McLean is a jeans and t-shirt kind of girl who is addicted to chocolate and Goldfish crackers and spent most of her formative years with her nose in a book. She has degrees in history and English and is thrilled that she sort of gets to use them. Her novel Truly, Madly, Sweetly, written as Kira Archer, was adapted as a Hallmark Original movie in 2018.
When Michelle’s not working, reading, or chasing her kids around, she can usually be found baking, diamond painting, or trying to find free wall space upon which to hang her diamond paintings. She resides in PA with her husband and two teens, the world’s most spoiled dog, and a cat who absolutely rules the house. She also writes contemporary romance as Kira Archer. 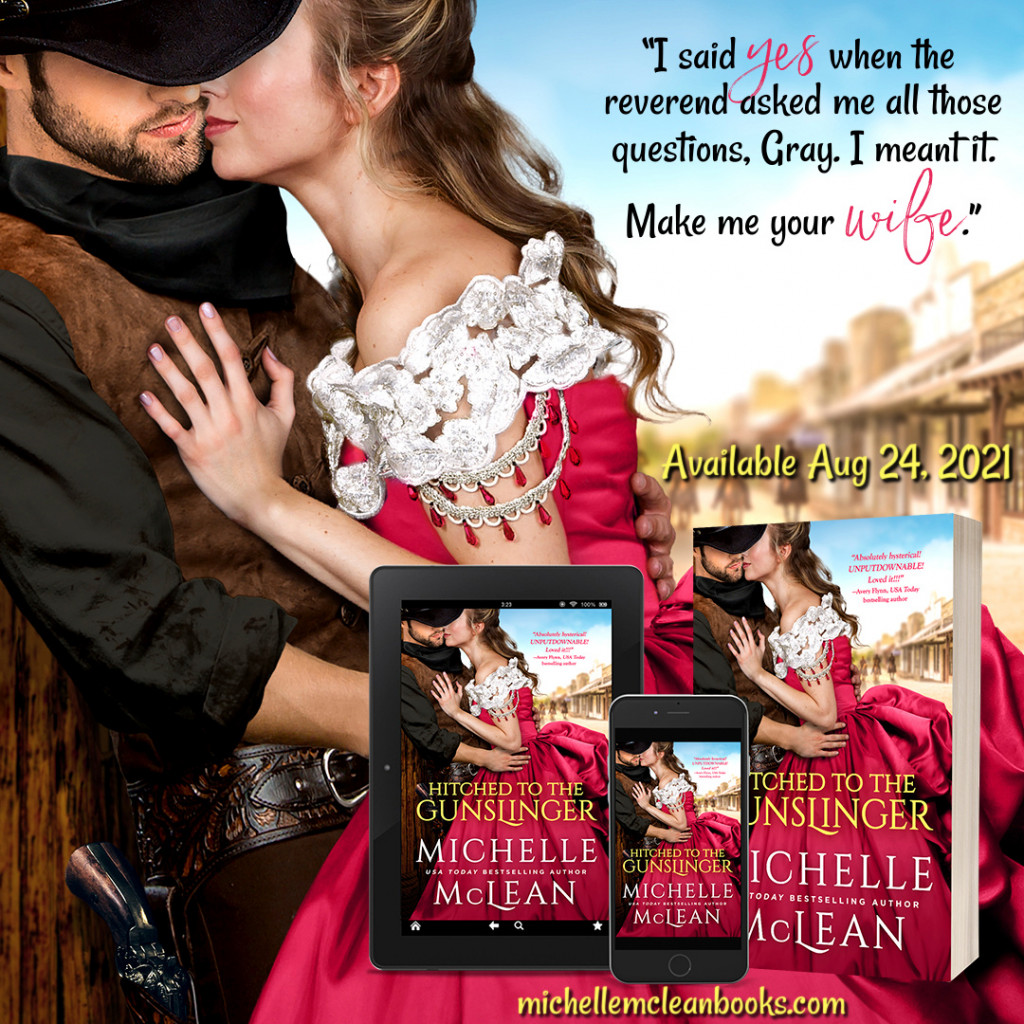 Jason, who had been watching them, his head swiveling back and forth like an inebriated owl, just smiled and crammed more biscuit into his mouth.
“Where are your guns?” he asked, motioning to Gray’s empty holsters.
He’d stashed the guns again once they’d returned home, to keep them all safe from Mercy, though he’d kept the holsters on. More out of habit than anything. It was bad enough not having the weight of the guns against his hips. The holsters were going to stay where they were for the time being.
Mercy snickered. “They’re stashed in the flour drawer.”
“Dammit,” Gray said, shoving himself out of his chair to go retrieve them. Now he’d have to find a new hiding spot. Not that the flour drawer had been ideal, seeing as how she dipped into it often. He held them up and grimaced. Not to mention the fact that they were now coated with flour and would have to be cleaned.
When he returned, Mercy was explaining why he kept hiding his guns.
“So, you won’t teach her either?” Jason asked. “At least now I know it’s not something personal against me.”
Gray scowled. “No, it’s very personal against you.”
Jason waved him off and took another gulp of his apple cider.
Gray slumped into his chair and watched him. “Why do you want to be a gunfighter, anyway? It’s not some noble profession.”
“That depends on your definition of noble,” Jason said.
“Your mother sure as hell won’t be proud of you for it.”
Jason shrugged. “My mother died when I was ten, and frankly, she’d just be happy to see me safe and making a decent living.”
“You have an interesting understanding of the words safe and decent.” Gray’s eyes narrowed. Sunshine was certainly a stubborn bastard. “You got lawmen constantly on your tail.”
Jason shook his head. “You’ve used that one before, but I’ve been following you for weeks and I haven’t seen one lawman after you. And you certainly don’t seem overly concerned about running into one. Especially considering your current arrangement,” he said with a wink at Mercy.
Gray shrugged. “That’s because I never start the fight. You never start the fight, it’s self-defense. Not my fault, so there’s nothing to charge.”
“Interesting,” said Jason. “See, I’m learning so much from you already. Imagine what I could learn if you were actually trying to teach me something. Don’t start the fight. Got it.”
“No, that’s not… You can’t just…”
Jason and Mercy both watched him with quizzical expressions, and he threw his hands up.
“You two… You just…” He growled in frustration, jumping up so fast his chair squeaked against the wooden floor, and marched out the door. He needed a break.