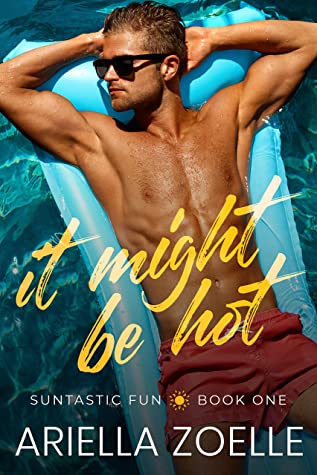 So of course I had to go for an ARC when I had the chance. I just love Ariella Zoella’s work (she writes some good sex scenes and hot couples you want to root for) and I was excited for this summery sexy read. It was very sexy I can tell you that. Haha. XD I am still fanning myself and it’s been hours since I finished the book.

Meet Alessandro, a sweet gay dude who is hot for his best friend Lachlan. Lachlan meanwhile is pretty much straight. Well, until this sexy evening in which he takes up Alessandro’s offer that Alessandro has been making for years apparently. The guy never gives up! I loved the bond between the two guys and I was pretty hyped to see them connect on a whole new sexy level. It was fun to see that while Alessandro is the gay one… it seems Lachlan also has some very hot tricks up his fingers and tongue.

It was great that we saw two sides to the story. We see both Alessandro and his confusing blend of emotions and Lachlan who is figuring out that being with a guy.. is well very hot.

I also loved the two other characters and I hope to see them in later books.

I did think it was odd that, the sex scenes were all condom free. I mean, no. Just no. You may not get pregnant no, good boy, but do you know that condoms also stop other things… And since you don’t know if your bestie is all that clean.. and if you are clean (given your womaniser ways)… I would recommend doing a test first, and maybe discuss ditching condoms after. Not just stuff your dick inside something without knowing if you may get something or not.

Also, while I did love that the two guys got together, I don’t see that as a spoiler as I got that from the start and I knew it would be HEA, it was just too rushed. I mean, the guys have HOT sex for a couple of pages and then suddenly BOOM relationship. I am happy that he isn’t throwing labels on himself and that he was open to exploring this whole thing a bit more, but it just felt too soon, unbelievably soon. I wanted a happy ending yes, but I would rather have had an epilogue and read that they had some experimenting, some talks, and then decided to get together.

But besides those two things I had tons of fun reading this one and I wouldn’t mind it being a bit longer. I cannot wait for the next Suntastic Fun books!