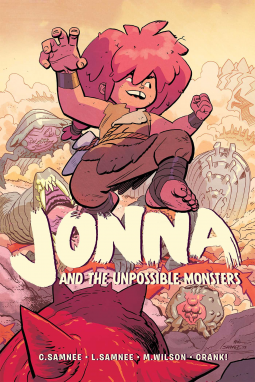 A book that sounded incredible, sadly it lacked in execution and I wasn’t a big fan. 2 stars. 🙁

Why didn’t I enjoy this one so much? Well, the story begins good with an exciting scene of one sister (Rainbow) following her sister (Jonna) who is once again running around. Something happens and boom it is a year later. Yep. That is what happens. However, instead of seeing something of a search she eats something at an older lady and boom someone has found her sister for her. It just felt so rushed. I would have loved more of a search. Seeing more of the land. Seeing more of everything. See her travel. Not eat dinner at someone’s place and then boom.

It is that the blurb states what has happened to the world otherwise I wouldn’t have understood it for most. I mean, we are a year later and suddenly the whole world is a dead zone. With monsters, no water, tons of dried out stuff, and more. It is dangerous. But instead of seeing what happened we just have to guess. Later on we get some conversations on what happened but it felt too late for me.

It also didn’t help that what Jonna is. I mean, I just cannot get a handle on the girl. She is so strong. She doesn’t seem to talk (and never did from what we glimpse in the earlier part/memories we get). For me it just seemed like Rainbow picked up a random wild girl. Jonna has zero emotion over seeing her sister again. Like she didn’t even know here. It just felt odd and very weird.

The whole story was just going from one thing to another. BOOM next scene. BOOM next scene. Explanations? What are those? Story? Naaaahhhh, action is where it is. Screw stories and explaining people what is going on. I mean the action is good, but it needs to flow right with the story. We need to be rooting for these people, not just seeing them for a couple of pages.

So Mehsi, is there anything you liked? Yes, I loved the art, it was fantastic. Lovely colour scheme, great character designs (well for most, still not sold on Jonna). I loved that we get some activities near the end.

But yeah, lack of story, lack of execution isn’t making me want to read this series further and this could have just been so much more. Just give it 50 more pages, instead of 115/116 make it more. Explain stuff. Give us reason to root for the characters. Show the world. Expand!