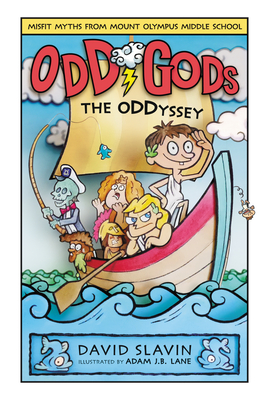 Two hilarious books featuring Oddonis, the Greek Gods, and tons of silly adventures. From going to hell to participating in the Olympics~

Last year I finished Odd Gods: The Oddyssey and just wasn’t into writing a long review. Then I got the chance to read book 3 (in ENGLISH) and wasn’t in the mood to write a long review either. So I decided to combine these two together and form one post! That way you all can read about how I feel about these 2 books as well. This series is great fun and I definitely would recommend it to all who like Greek mythology along with tons of weirdness and silly events.

: In this book Oddonis (I still really hate his Dutch name, Kakdonis which translates to Poopdonis, I just think it is the most stupid way to translate the word Odd) and his friends (oh and his brother) get send to the Underworld because of a curse that Hades did. Now we all know that Hades loves cursing, but I guess there is a fine line on who to curse, haha. Turning Zeus into a big annoying manbaby (which had me in stitches but also made me feel sad for the moms) is a thing that is a big no-no. The journey to the Underworld was hilarious and I loved how Oddonis and his friends figure out solutions to problems, when they get stuck, and other stuff. Because well… as you may guess, Adonis is just the most useless God ever. I loved seeing the witch, the cyclops, the sirens from the old story (on which this one is based) pass by. Oh, and did I mention there is an underpants world? No? Well, there you go. I laughed so much.
As for the end I was afraid they would go a certain direction and so I was no-no-noing quite a bit, but thankfully truth will always come out. I had a big laugh how things were solved in the end. The art was great fun as always! It fits so well with this crazy and weird story. 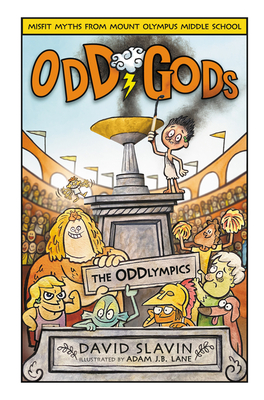 : So this was the first book from the series I could read in English! Generally I read these books in Dutch as that is the one you can find, but this time I found the English one! In this book a TON of things happen! The kids find out that their Mount Olympus may not just be all for them. Oh no, on the other side of the mountain there are the Roman Gods. The mirror images of the Greek Gods (or the Greek Gods are mirror images of them, that is a discussion that comes up in this one). I had a big laugh at how the kids reacted to the news of Roman Gods and the fact that for each of them there was a Roman God. Even the Odds meet their fellow Odds and that had me very happy as I was already wondering about that! Then there is the biggest thing in the whole book, the Olympics. Or the Godlympics as Zeus so proudly calls them. I loved reading about the Olympics, though I did feel sorry for the kids who got totally dragged into a war between Zeus and Jupiter who should just freaking grow up already. Thankfully, I am not alone in thinking this one. A lot of grown-ups are on my side. At first the Olympics seem to go to one direction, but I was happy, and also so proud, to see the kids stand up for themselves. And what happens next was just pure fun! Seeing the kids work together, Gods and Odds. See them try to show the grown-ups what they can do. Take control.
I laughed a ton in this story and I had so much fun reading. I definitely flew through the book!