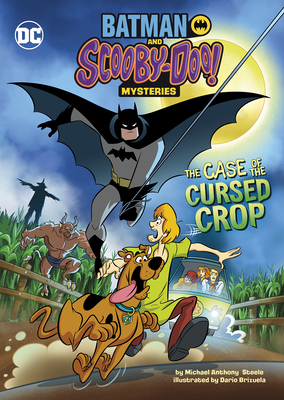 I am a big fan of Scooby Doo and the gang, and a bit of a fan of Batman (depends on the Batman, haha), so I just had to pick up this book. I was a bit surprised it was a normal book, I had expected a graphic novel! But as soon as I got in the story (around 10 pages in) I was lost. This was just as fun as watching an episode of Scooby Doo. It has that same feel, the same spookiness/mystery, all the characters are exactly like in the show, we get scooby snacks, and of course Velma loses her glasses (classic Velma). Batman is batman. It is great.

In this one Scooby and the gang are called to a farm in the middle of nowhere. There is something spooky going on and it is up to our gang to find out what is happening. Or well, who is having beef with the owners, because we all know that most of the Scooby stories feature human villains. Only a few series/movies feature real monsters. I was definitely curious who was “haunting” the farm and also why.

The addition of Batman… mmm, not sure how I feel about it. On the one hand, nice touch, on the other hand I was never such a big fan of superhero additions to my spooky gang of teens and their dog. Haha yeah, I know, why did I pick up this book when I know there is a superhero there. Well, um, Scooby Doo? XD But I guess for what happens in this book a superhero is just what they need. There are big beasties around and having someone to be able to fight those is a handy thing.

The mystery and the monsters that came with it was just a delight to read. I was totally into the story and totally curious on what was happening! I was glued to my screen (sorry eyes).

I had such a laugh at how Batman was trying to correct Scooby’s Ratman as he cannot pronounce the B. Poor Batman. You are never going to get it right with Scooby. You are just Ratman. You gotta live with that, man.

I was actually quite happy with the villain! I guess that is what you get for being so close to a certain city. That was a great surprise.

There are also illustrations dotted throughout the book and I LOVED THEM!

All in all, I so want more stories! I want more books like this! Give me more! I would highly recommend this one to fans of Scooby Doo and also those of Batman.

2 thoughts on “Review for Scooby Doo!: The Case of the Cursed Crop”