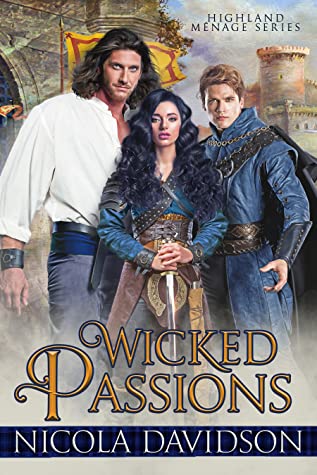 A tournament, tons of sexy times, and I had so much fun reading this sexy book!

So in this story we have Alastair who loves his lord and best friend Callum. Callum who is into Alastair. And then there is Isla, the one who will connect them all. I just love these three together and they make such a wonderful trio. I instantly took a liking to them all. Callum was such a sweet guy who isn’t that much into fighting and would rather just read books and strategize and such. Alaistar who is a big big guy and he is so kind and always there for the ones he loves. Isla, I just love a girl who can wield a sword and who kicks some serious butt. I felt for her, because her family clearly isn’t happy with her being so into fighting (oh and wearing pants). I loved how the boys were totally fine with her being that way and even, despite not being together for real yet, promised that if they won that she would have a happy life filled with swords and pants.

The story was pretty predictable to me. I knew from the start how things would go. How the tourney would end. What would happen between Isla, Callum, Alastair. It was still tons and tons of fun to read, especially since we did get some wrenches thrown in to give the story a bit of a turn, but it just wasn’t enough. I would have liked to see a bit more excitement. Just a tiny bit more. A bit more effort for our trio.

The sexy scenes. is still fanning herself and looking around for ice cubes to put in places Just like the previous book they are HOT. Sizzling even. At times it even became a bit too much for my poor brain. XD I loved all the things these three get up to.

I love that we get to see our trio from the previous books again! I was already delighted to see them mentioned in the beginning, but later two of them are there even more and it made me smile that these three are still happily together!

Again I just cannot get used to reading about cunts. For me that is a curse word, not a word for vagina. XD Also, just like the previous book which was just 150 pages and this one is 180 pages, it felt like 300/400 given that it took me 3/4 hours to read it. Normally with a normal novel it would take me less than two hours to read 180 pages.

But all in all, I had so much fun with this sexy and fun book and I can just say one thing… PLEASE can we have more? I need more!