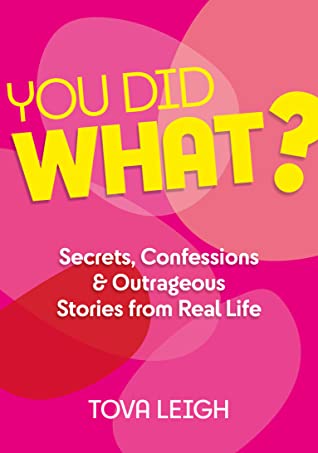 One of my favourite thing to read in magazines and in other places is confessions. So I was pretty hyped about this book that promised to be full of confessions! From parenting to sex and to revenge and more. I was in!

And I am definitely happy I had the chance to read this one. The parenting one was by far my favourite. I also liked that each chapter had an introduction by the author in which she tells us some of her stories, some of her favourite confessions, and more talk about her show. I really liked those intros. I also liked the fact that the confessions come from all over the world. From my country (the Netherlands) to the US to Israel to Brazil. I also read a few aloud to my husband when they were especially funny and he had quite a laugh too.

I did think it was odd that we had a revenge chapter and that in the sex/relationship one we also got revenge confessions. I would have rather seem those appear in the revenge section. Yes, they fit in the relationship/sex one as well, but if you have a special chapter for it, why not add them there?

Sadly, I am deducing 0.5 stars because of the occasional mention of COVID. It is really little, but still too much for me. I read books to escape, I don’t want to read about COVID, AT ALL. Maybe in 5 years, maybe in 10 years (probably even more years). But definitely NOT WHILE WE ARE STILL IN THE MIDST of things. Thanks.

I also feel that confessions should just be short and to the point. 1 page is a bit long but I am OK with it, but there are a few confessions that were 2-4 pages long (and a few even longer) and that is just too long, I started getting distracted while reading them as often it took until the last page before the good part came.

Also, I know you said no judgement, but screw that for people who confessed to having cheating (and some even getting pregnant). F that. I am sorry to say, but I have been cheated on twice in my life and that feeling is just the most terrible thing. Why would you do it to someone you love? Someone you care about? And if it is because your relationship sucks, just break up. This is just no.
Oh and the girl who was having sex without condom because the guy believed she was using birth control. WTF? And then gets pregnant and is now together with the guy. NOPE.

All in all, I did have fun reading this one, yes, there were some parts I wasn’t a fan of, but in overall I enjoyed reading this and I would love more (though no more bodily fluids, thanks)!