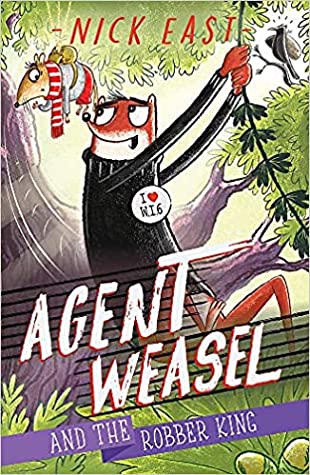 Agent Weasel is back on the case… this time with crows, magpies, and tons of action!

A new Agent Weasel, though I had expected it to be book 2, but apparently we are already at the third book! Haha. Luckily you don’t need to know much about previous missions which is nice. I was already worried that I would have to see if one of the libraries around my vacation spot would have them (slim chance given how tiny the libraries are).

In this one we have a Robber King making it hard for the animals and our agents (including of course Weasel, but also Otter, Mole, and others) have to figure things out fast before things go all wrong. It was a fun and action-packed book filled with lighter moments and tons of humour that had me laughing so much. I loved finding out about the Robber King and what his plans were. How it was all wrapped up was both funny and action-filled because a ton of things happen. I do hope that our Robber King behaves himself a bit more.

I am still not a fan of Otter that much, because of how they act all high and mighty. But they did help our crew plenty of times, so I guess they aren’t all too bad.

I also had a laugh at all that was hidden in the jumpers of the agents. So many things! It reminded me of other shows/books in which characters seemingly have endless room in places that you don’t expect. Give me a sweater like that, I wouldn’t mind hiding in some extra books when I am on the road. XD

The fun art made everything even more silly/fun/great.

I am now at home, so hopefully one of my libraries here will have the second book as I need to know what happened in that book~

2 thoughts on “Review for Agent Weasel and the Robber King”