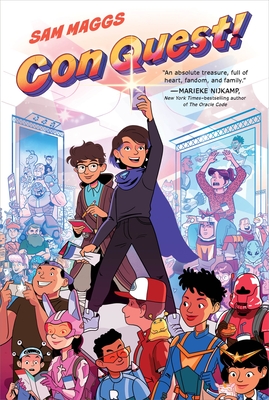 I just cannot resist books about conventions! I have been to a couple of anime conventions and while I did enjoy myself a lot during those times, it was also a bit too much at times. But reading about it, I don’t have the feel of hundreds of people and way too crowded. XD

This was a delightful and fun read from the POV of three kids (well, one teen I believe, not sure what 9th grade equates to). Cat and Alex, twins and their older sister Fi who is going to experience that con can be very fun. I really enjoyed reading the story and while I was a bit hesitant about Fi’s POV at first (given how she acted in the beginning), I really warmed up to her as the story continued and she became my favourite POV. Followed by Cat who despite some dumb things was still a great character and I loved her drive and how she kept going. Alex was my least favourite, though he also had some points that I liked and I definitely warmed up to him as the story went on.

I loved the friendship (or should I call it more) between Rowan and Fi. I was very much looking forward to those parts and see that grow and see them have fun together.

It was so much fun to follow these characters around the con, see them meet people, befriend people, meet celebs, see tons of fun things, and that Quest thing was just a delight and such a fun initiative and I just wanted to participate in it. It was just a shame that

The only thing that kind of ruined it for me was that guy at the convention, I forget his name already because I don’t want to think of him, but he just was the worst. How he treated the kids is not how any volunteer at a con should act. His high/mighty attitude and his gatekeeping was just disgusting and I really hope the con (and any cons for that matter) reconsider hiring him ever again. Because LORD, this is bad.

Though haha, thanks to tags on Goodreads and other places I thought this would be a graphic novel.. it is totally not one. I would have loved some illustrations though.

All in all, a very fun story about a conventions, fandoms, being yourself and finding yourself, doing quests, and having tons of fun. Recommended!