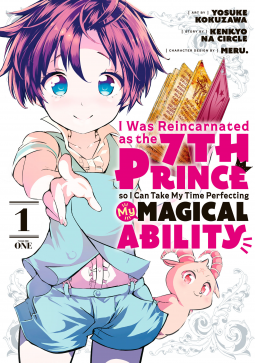 This was one of the new manga from Kodansha that I just HAD to try out. I mean the title is already one thing (it is glorious), but the blurb and the cover also looked very nice and so here we are! Finally had the chance to read this one last night and I enjoyed it really a lot.

Meet Lloyd (which in my mind I kept pronouncing as Laloyd as Garmadon in Lego Ninjago does), a boy who is the seventh son and a prince. Well, he wasn’t always a prince as we can see in the pages before he is born.. he was originally a worthless sorcerer and got executed. But with reincarnation comes some nice perks, and I am sure that being the seventh son also helps. Lloyd is superpowerful. Like crazy overpowered (something another character finds out). A little fireball may seem harmless, but in Lloyd’s hands it is a weapon and will destroy things around him. XD And there are other instances in which Lloyd does things that are just not normal (100s of spells for instance in one go). I am still not entirely sure how I feel about Lloyd. For most I really like the little guy and I love how hard he is studying, and hello, how can I not like a character that sneaks into libraries when he wants to read but actually has to do combat training. XD But sometimes, I am not sure, I wonder if the little guy will stay good or if he will turn to the dark side when he gets older. It also doesn’t help that he can put up some really menacing faces when he is doing magic or thinking of something. So yeah, I kind of hope he will stay good as that would be the most fun for me.

I love seeing Lloyd go through the daily things of a 10 year old prince. From having to bath with the maids (which is hilarious on its own but now imagine it being an adult man in the body of a child, he is trying very hard not to look at all the things around him XD) to combat training with his mentor (who is one of the best characters in the book) to being around with one of his brothers (no clue where the rest of them are). In the mean time, all Lloyd wants to do is study, practice magic, and the likes.

Somewhere mid-way we get a new character, someone who has immediately regrets ever meeting Lloyd. Namely a demon. Who thinks that Lloyd is an easy target because he is a kid. Oh boy, I just felt so sorry for that poor demon. And also later in the manga as the two get closer and Lloyd gets more inventive with ways to keep the demon, I was just thinking that someone should free that demon and bind it back to the book it came from. I did like the demon though. How he tried being evil but found out it was better to be normal. I did think it was a shame that he lost his cute form so soon, I wouldn’t have minded seeing more of that.

Then later on our prince goes on an adventure and we meet an even better character and one that I hope will pop up more often in the next volumes. Tao. A girl who is martial arts specialist and truly can kick some big fat ogre and other ass. I had a laugh though at how one-track-mind this girl was, she saw a hot guy (Lloyd in his disguise) and instantly went to try and make him her BF. You go girl! Good luck. XD

The art. Well, I would have loved it was just a bit more consistent. At times we get AMAZING WOW art (the Lich and some scenes with Lloyd), but at other times it gets very ugly with weird looking chibis. It is just a shame as it did affect my reading pleasure.

But all in all, I laughed, I cheered, and I was curled up nicely in my bed enjoying this manga! I definitely want more of this!