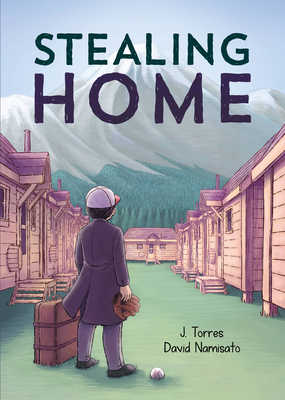 I have always been interested in stories from the WWII, so when I saw this graphic novel I just had to click that request button. I haven’t read a lot of books about the internment camps for Japanese/Asian people, they aren’t so easy to find. So I was eager to read this one.

In this one we meet a boy and his family. We see how the dad works as a doctor and is barely there, which I found just sad. I mean, I understand he has to work, but the kids were constantly disappointed. They went to grab their stuff to play ball and then dad would have an emergency.
Yep, a big theme in this book is baseball. They are fans of Asahi team. I loved seeing the MC play baseball, exercise with his dad (if he was there) or with his little brother (who wasn’t so good). Throughout the graphic novel we will see that baseball will keep playing a big role for our MC, and I definitely like this. The MC himself was a pretty great character.

Things were looking pretty OK at the beginning… but then things quickly went south. Pearl Harbour is bombed and we see how that affects the Japanese/Asian community. People are mean to them (even friends in class). We read of internment camps. That was pretty shocking as those camps, in the beginning and maybe just at a lot of places, were little more than tents, or tons of people stuffed together. It was heartbreaking to see families broken apart, sickness spreading, worries growing.

Then it is time for our family to move to such a camp. I was at least thankful for them that the camp was houses. Not really good houses, but at least something to keep them warm/protected. The way the camp worked was interesting to read (I hope that is the right word, my mind also tries to find another word but it is not coming out). We see how our family tries to make the best of it. I was totally happy when they met up with the dad again.

The book gets interested and interested (and at times very sad or harrowing), but sadly, the ending was just way too soon in my eyes. It felt more like a chapter ending instead of a graphic novel ending. It just came out of nowhere and I feel that much more could have been said and done. Or maybe at least make it feel natural. Because of the ending I am rating this book a tad lower, from 4.5 to 4 stars.

The art was really nice, I like the style.

All in all, I am glad I have read this book. It was an interesting look in what happened in America to Japanese/Asian people. It is just heartbreaking that these people, even after the war, had to fight so hard to be accepted again. To find a home. To find jobs. To find a place to belong.