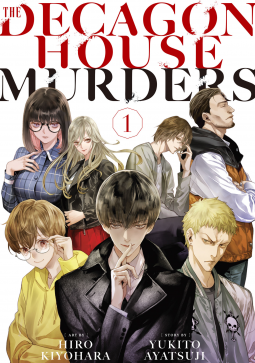 So I just had had to get this manga from Netgalley. I mean, murder? A literature/mystery club travelling to a remote island that was the scene of murder? They are totally cut off and things start happening? YAS and YAS.

This just had all the vibes of an older manga despite being set more in the now-days. Which just made me love the story even more as I am a big fan of those. Plus, I just love that a lot of things don’t work on the island and that they were totally cut off. They were on their own. Or are they? That made things definitely a bit scarier and more exciting to read because you need to know. Is it one of their own… or is someone with them on the island. Out for revenge, or something else?

I am not sure how I felt about the peeps in the literature/mystery club. I mean, some of them definitely worked, but the guy who acts all bossy… not a fan of him. He reminds me of several other characters in anime that I just wanted to punch in the face. XD He seems all high and mighty and that is just not a character trait I enjoy in my characters. I think so far my favourite is one of the girls, the one who is all eager to get doing things. I do love that each of the club has a specific name from mystery novels. From Poe to Agatha. It was such fun (though yes, I am also curious about their real names).

And I was even more surprised that the island and the mystery club weren’t the only thing we saw! Oh no, we also go back to the mainland and see 2 other people from the literature club/mystery club, or well, not sure if they are totally still members, who get a mysterious envelope/card and are going to investigate… because they also know that things are going to get real bad on the island if these threats are to be believed. I loved that they found someone who believed them and who tried to help them out. I love finding out more about the club + more about mysteries and also about an event that happened some time ago… something also connected with the island which had me squeeing in delight and making me all the more eager to don my detective hat and get solving!

The ending, ARGHHHH, I don’t want a cliffhanger. NOOOOESSSS! I was so frustrated when I saw that ending come up and find out there were no more pages. No, you can not do that to me. No. I already wanted to read the next book but now I definitely need it. NOW. Pronto.

The art was just amazing, the backgrounds especially were just so life-like and I just felt like I could step into the story at any moment. Love love it!

I would definitely recommend this book to all, if you are into mysteries and murder and spooky things be sure to check out this manga.