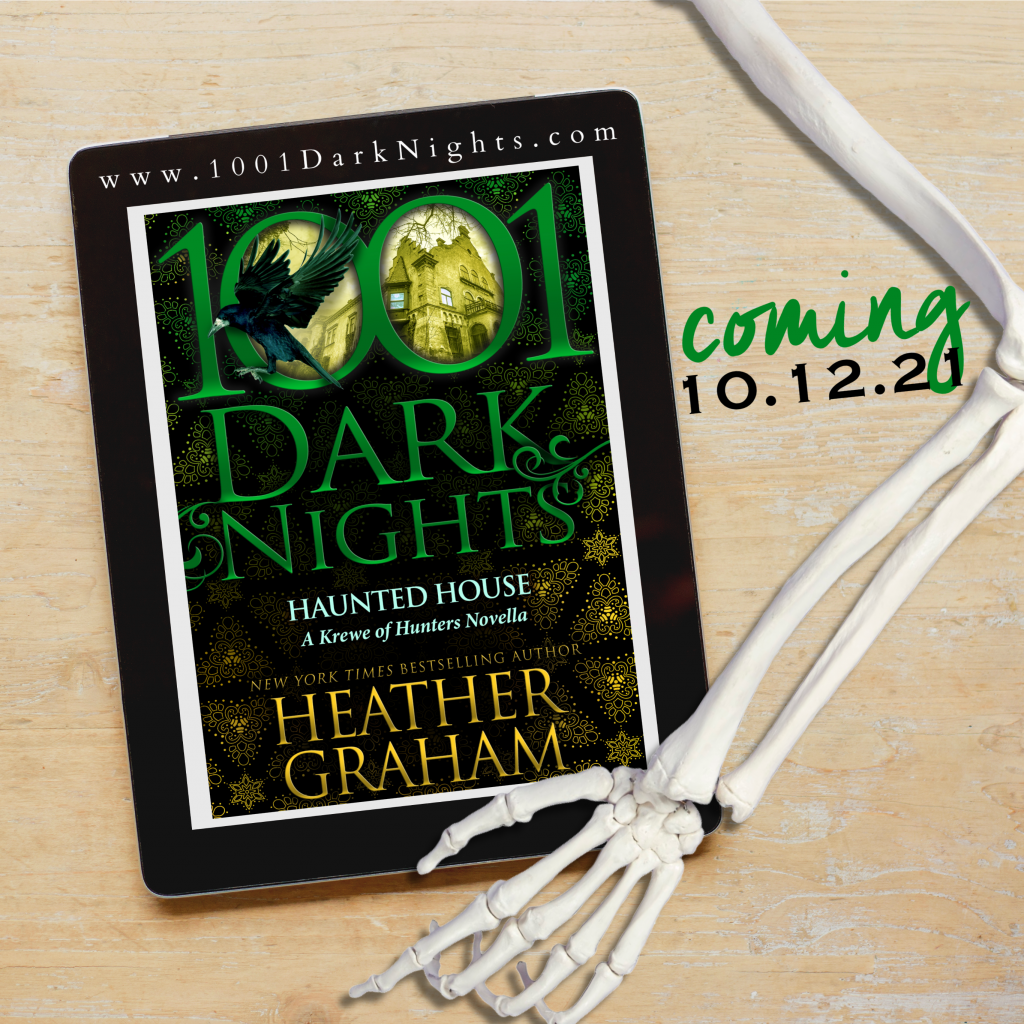 🎃🎃A spooky Halloween welcome to the Blog Tour for Haunted House by Heather Graham. I am so delighted to be part of the tour, though haha, with my head elsewhere I had kind of forgotten about it until I got the mail. It is a happy surprise though because it fits perfectly with my blog at the moment + I really want to read the book!

For today’s post I got an excerpt + book/author information. 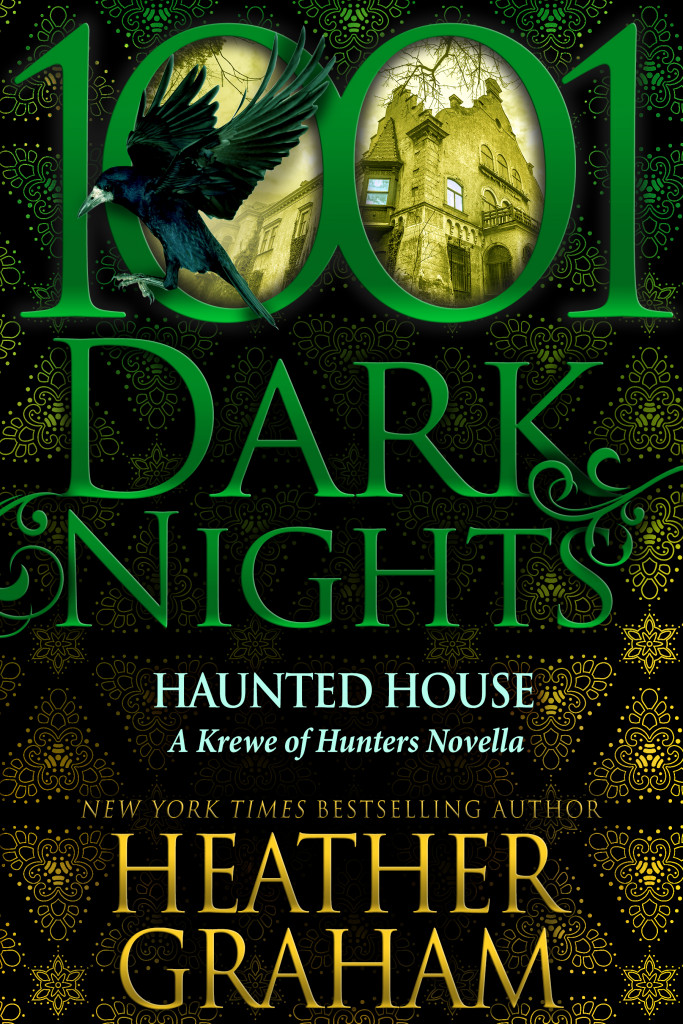 Haunted House, an all-new novella in the Krewe of Hunters series filled with mystery and suspense from New York Times bestselling author Heather Graham and 1,001 Dark Nights is available now!

Halloween! Strange things are going to happen and every year, while loving the holiday, members of the Krewe of Hunters also dread it.

Something somewhere is bound to happen.

Krewe member Jon Dickson’s fiancée Kylie Connelly is contacted by an old friend who has just moved to Salem, Massachusetts, when the unimaginable happens as the holiday approaches.

Jenny Auger has just managed to buy the historic home of her dreams. But it comes with far more history than she ever imagined—the skeletal remains of seven victims interred in the old walls of the house years and years before—along with a threatening curse.

And strange things are happening in the city. Bizarre attacks…murders that mimic days of old.

With Halloween on the way.

Kylie has a history with the city of Salem, and her strange talent for being within the minds of those under attack—first realized in the city—remains sharp.

But the situation is far more dire than what they have discovered, with strange events and attacks occurring.

And with all their talent for crime solving—with help from the living and the dead—it still remains to be seen if they can solve the murders of the past before Halloween, and the bloodbath that just might occur if the sins of a time gone by cannot be brought to light.

New York Times and USA Today bestselling author, Heather Graham, majored in theater arts at the University of South Florida. After a stint of several years in dinner theater, back-up vocals, and bartending, she stayed home after the birth of her third child and began to write. Her first book was with Dell, and since then, she has written over two hundred novels and novellas including category, suspense, historical romance, vampire fiction, time travel, occult and Christmas family fare.
She is pleased to have been published in approximately twenty-five languages. She has written over 200 novels and has 60 million books in print. She has been honored with awards from booksellers and writers’ organizations for excellence in her work, and she is also proud to be a recipient of the Silver Bullet from Thriller Writers and was also awarded the prestigious Thriller Master in 2016. She is also a recipient of the Lifetime Achievement Award from RWA. Heather has had books selected for the Doubleday Book Club and the Literary Guild, and has been quoted, interviewed, or featured in such publications as The Nation, Redbook, Mystery Book Club, People and USA Today and appeared on many newscasts including Today, Entertainment Tonight and local television.
Heather loves travel and anything that has to do with the water, and is a certified scuba diver. She also loves ballroom dancing. Each year she hosts the Vampire Ball and Dinner theater at the RT convention raising money for the Pediatric Aids Society and in 2006 she hosted the first Writers for New Orleans Workshop to benefit the stricken Gulf Region. She is also the founder of “The Slush Pile Players,” presenting something that’s “almost like entertainment” for various conferences and benefits. Married since high school graduation and the mother of five, her greatest love in life remains her family, but she also believes her career has been an incredible gift, and she is grateful every day to be doing something that she loves so very much for a living

“Two tourists went missing. They found one in a giant jack-o’-lantern.”
“And you think the other is in Brenda’s wall?”
He looked ahead at the road and shrugged. Then he said, “Yes.”
“What is it about Halloween?” she murmured.
“Hey, we’re still on Thursday night. Halloween is Sunday.”
She turned to him as he drove and said, “Halloween in Salem is pretty much all of October. And it can be so wonderful—music, performances…”
“And a town filled to the brim with tourists. People who love the holiday. And this year…people who like to find their prey. But I’m asking you, are you okay going back? You’re amazing, and you have learned to shoot and have taken self-defense classes, but—”
“But I’m still a civilian, and I’m not trained.”
“Trained or not, your ability is an amazing asset, Kylie. A killer could have gotten away if it weren’t for you.”
She smiled at him. “Jon, I want to stop bad things from happening whenever I can.”
“But you were almost killed,” he reminded her.
“I had you. I have you,” she said softly.
Jon hoped it was enough.
“So, what’s the plan?” Kylie asked.
“We’re going to get a room at the Hawthorne. I don’t have the office on Essex Street anymore, but I love the hotel. It will be about five a.m. when we get there. We’ll check in, I’ll get you to the police station to be with Brenda, and I’ll join Ben at the house and see what they’ve found.” He shrugged. “This is a local matter, you know. Ben is a friend, and he won’t have a problem with me assisting in his investigation. But as of now, this isn’t a federal case. And while most cops are great to work with, every now and then, you hit one who doesn’t like federal interference.”
“Or that of weird people who see things through the eyes of others,” Kylie murmured.
“Ben must be the lead detective on this case—the missing tourists. We’ll be fine. But—”
Kylie swung in her seat to watch him as they drove. “Of course, we could find out that someone did get into Brenda’s historic dream home and set her up to find a ridiculous Halloween prank. And, Jon, you’re the agent. And you’re good—incredibly good at what you do. I won’t put myself in any danger,” she promised.
He smiled and nodded and then said, “After I meet with Ben, and we calm Brenda down, I’d like to try and find Obadiah Jones. I have a feeling he might be looking for me.”
Obadiah Jones was an old friend.
A very old friend.
A dead one.
When Jon had been just a kid, Obadiah had been the first spirit to approach him—and with no-nonsense determination. Obviously, not many people would listen to a dead man.
But a child had been kidnapped.
Thanks to Obadiah insisting that Jon act—even if he was only a kid at the time—the crime had been nipped in the bud.
Also thanks to Obadiah, Jon had learned in his later years that he wanted to serve his country so he could then go into law enforcement.
“I’d like to see Obadiah, too,” Kylie said.
“We’ll search for him together,” Jon promised and managed a smile. “We’ll search for him or he’ll find us, I’m sure.”
“Yep.”
“I wonder if he can help.”
“He’s an amazing spirit,” Kylie said. “If we need help and we’re not just looking at a Halloween prank, that is.”
They had traveled no more than forty-five minutes before Jon’s phone rang. He answered it through the car system.
“Jon Dickson.”
“Jon,” Ben said.
“And Kylie. I’m here, too, Ben. And thank you,” Kylie said.
“No,” Ben said wearily, “Thank you.” He hesitated. “We definitely found our second victim. And, sadly, this wasn’t any kind of a Halloween prank.”