A scary and spooky welcome to the Blog Tour for The Clearing by Tom Deady! This book sounds amazingly scary and I am happy I can promote this one. Perfect for Halloween~

What do I have for you today? Oh SO MUCH! I got a trailer, a special excerpt, a giveaway (INT so go go), and of course book/author information!

Are you ready? Then let’s get started! 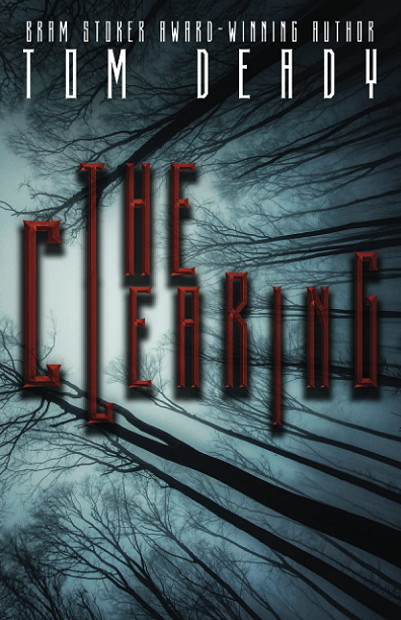 When Hannah Green’s dog comes out of the woods carrying a sneaker that contains a partially decomposed foot, she thinks it’s the worst thing that could ever happen to her.

Hannah and her best friend, Ashley, decide to play detective but find themselves in the middle of a decades-old mystery.

What is the strange old woman Mama Bayole hiding in her decrepit farmhouse? Why is the local librarian so determined to prevent them from researching town history? Who is following them around Hopedale, New Hampshire?

The girls make a shocking discovery about what has been happening in the woods behind Hannah’s house. As they get closer to the truth, things take a dangerous turn, and they play a deadly game of cat-and-mouse that may end up costing them their lives.

Tom Deady’s first novel, Haven, was published by Cemetery Dance in 2016 and won the Bram Stoker Award® for Superior Achievement in a First Novel. He has since published a novel entitled, Eternal Darkness, as well as several short stories and novellas, his most recent being Coleridge.
His novel, The Clearing, is book one in a horror trilogy and inspired by true events. (Vesuvian Books, 2021) Tom holds a master’s degree in English and Creative Writing from Southern New Hampshire University, is an Active member of the Horror Writers Association, and a member of the New England Horror Writers. He resides in Massachusetts where he is working on his next novel.

Hannah walked slowly along the trail, keeping an eye on Scout. She anticipated a lecture from Dad when she got home—I told you to keep him on the leash, Hannah—and was in no hurry to get there. She crested a rocky rise and sat on a large boulder. It was a favorite vantage point of hers, with just enough breaks in the trees to offer a beautiful view of the woods. Autumn isn’t that far off, she thought, catching hints of yellow on some of the leaves in the distance. She pulled out her cell phone and glared at the two words at the top of the screen:

“Life in the sticks,” she mumbled, and stood. She would have to wait until she got home to call Ashley and make plans for later. “Let’s go, Scout.”
She kicked small stones as she walked, enjoying the day but wishing it didn’t feel so fall-like already.
Something crashed through the bushes to her left.
“Scout, get back here!” Why didn’t I put the leash on him? She pushed through the scrub pines, intent on catching Scout before he found something else gross to roll around on. She heard his tags off to her right and spotted a flash of tan fur. Then he was gone.
She slowed her pace and followed.
“Scout, come on, boy!”
The shadows deepened as she moved farther into the trees. Above her, the branches joined, conspiring to keep the sunlight from reaching her. She stopped to listen, unnerved by the quiet. The cicadas and early crickets had gone silent. Her own harsh breathing and the occasional sibilant whisper of the breeze through the trees were the only sounds she heard.
“Scout?” she called, softer, not wanting anyone else to hear.
A distant jingle caused her to let out the breath she didn’t know she was holding. She moved toward the sound, careful not to make a noise, cocking her head for another warning that Scout was near. She stopped again, listening. A different sound reached her, not Scout’s collar but a rustling. No, that wasn’t right—it was more frenzied somehow. Then the dog tags were all she heard, growing louder.
“Good boy, Scout,” she called, a relieved smile on her face.
Scout darted out of the trees with something hanging from his mouth. Hannah shuddered, thinking it was some poor animal. When he bounded closer, she laughed. It was just an old, pink Converse high-top. “Good boy, Scout, you didn’t kill anything today.”
Scout dropped his prize at her feet and sat on his haunches, looking up at her.
“Sorry, boy, I didn’t bring treats.” She bent to pick up the tattered sneaker and leaped backward with a squeal. She swallowed hard, her throat gone dry, and leaned in closer to the sneaker. “Oh, God …”
Scout’s ears dropped, and he whimpered. Hannah bit her lip and crouched next to the shoe. Using a nearby stick, she pushed away legions of squirming maggots. The color washed out of the day. The normal sounds of the forest became oddly threatening. Then the smell hit her, and she gagged, falling backward onto her butt. She rolled to the side and threw up, spewing her breakfast onto the mossy ground. Scout barked frantically. Hannah stared at the pool of puke, watching it run down the slope. A string of saliva connected it to her mouth, and she reached up to wipe it away. The slimy texture reminded her of the maggots, and she dry-heaved until her head ached. Closing her eyes didn’t help; all she saw were wriggling white things. Scrambling to her hands and knees, careful to avoid her recycled breakfast, she tried to stand. The ground tilted and she closed her eyes again, ignoring the sickly pallid shapes that moved there. Would she ever not see them? Using a low-hanging branch for balance, she tested her legs to make sure they’d hold her before letting go.
“Where did you find this, Scout?” Hannah’s voice came out gravelly, her throat sore from vomiting. She stared off into the shadows of the trees where Scout had come from, remembering the frantic noises she’d heard before he’d reappeared.
Digging.
She looked around as if someone might be watching, or even sneaking up on her. She shook off the thoughts and decided it was the old sneaker freaking her out.
Well, not the sneaker itself, but the partially decomposed foot sticking out of it.