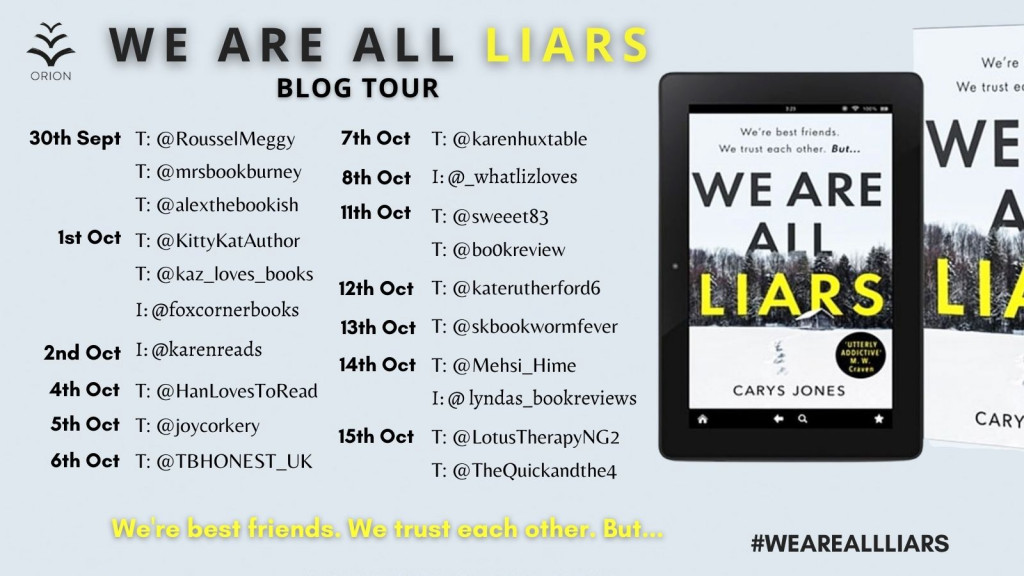 Welcome all to the Blog Tour for We Are All Liars by Carys Jones! I just HAD HAD HAD to participate when I got the invite. I just love thrillers, especially with unreliableness added in.

For today’s post I got a 3.5-4 starred review (just couldn’t pick) + author/book information.

Let’s get the tour started~

So I was waiting for October to come around before I wanted to read this one because it is perfect for my Spooktober reading month! And I am glad I did wait because this was a ride! At times a tad slow, but there were enough moments that I was fully invested.

We got three ways of story-telling. We get flashbacks to tell us several events in the past that ruined everything and made the friendship cracked and broken. Especially the summer when they were 15. I loved the flashbacks so so much as it gave some clarity on everything, on their secrets, on their relationships, on their past, on their friendship. We see that each one of them carries secrets, has lied, hasn’t had it easy. Then there is the police interviews with an POI (I had my suspicion on two people, glad I was right). And lastly we have the story itself. The cabin, the birthday party, how everything went horrifically wrong. How things just went south. At times a bit boring as accusations flew by and no one listened to each other, or too much dialogue, but at times very very exciting and I was on the edge of my seat (today 6-10) or curled up in bed (the last 2 nights) just waiting to see what would happen. Who would survive. Who stole Emily’s insulin. Things got more hairy as the story continued and secrets were laid bare.

I really wonder why these girls have been friends, have stayed friends. I mean since those events in the summer of their 15th things just burst. Things went wrong. And I wonder why they stuck so closely to each other. Why they still acted like friends while the reader can clearly see that this isn’t a healthy friendship. Not at all.

Allie was for most our MC and see most of the events through her eyes, at least those in the story itself. In the flashbacks it is also about the other girls. I am still not sure how I felt about Allie. On the one hand I am happy she is continuing life, on the other hand I just wanted her to get over things, it’s been 20 years. She seems so stuck into that accident. As Lucas said, a part of her is seemingly still there. I wanted her to be honest. To tell people no. To talk to Lucas, because I found it a big dick move of her that she never told him she couldn’t get kids… while he wanted those. Hello. Talk about that. I know I did with my husband. I don’t want kids of my own (due to health reasons) and I made that clear quite early in the relationship because I wanted to be sure he is OK with it. I would definitely NOT hide such a vital thing to anyone.

The ending. *boom* My mind is blown. I won’t say anything more, but DANG, I didn’t see that one coming. That came totally out of the left field for me. XD

All in all, slow start, sometimes a tad confusing or too much dialogue, but when it gets going it goes and it was very exciting and I had fun reading this book and see all the twists/turns (though that ending. WOW) 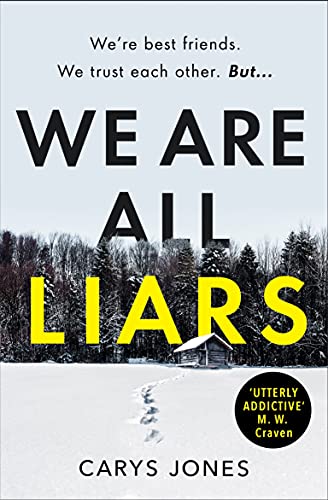 We’re best friends.
We trust each other.
But…
We are all liars.
Allie, Stacie, Diana, Emily and Gail have been by each other’s sides for as long as they can remember. The Fierce Five. Best friends forever. But growing up has meant growing apart. And little white lies have grown into devastating secrets.
When Gail invites the increasingly estranged friends to reunite at her Scottish cabin, it could be the opportunity to mend old wounds and heal the cracks in their friendship. But when a freak snowstorm rocks the cabin and one of the girls is found dead on the ice, their weekend away becomes a race against time – and each other – to get off the mountain alive.
And in the end, whose story can you trust, when everything was founded on lies to begin with?
A rip-roaring psychological thriller with a twist you won’t see coming – perfect for fans of Lucy Foley’s The Hunting Party and Ruth Ware’s In A Dark, Dark Wood… 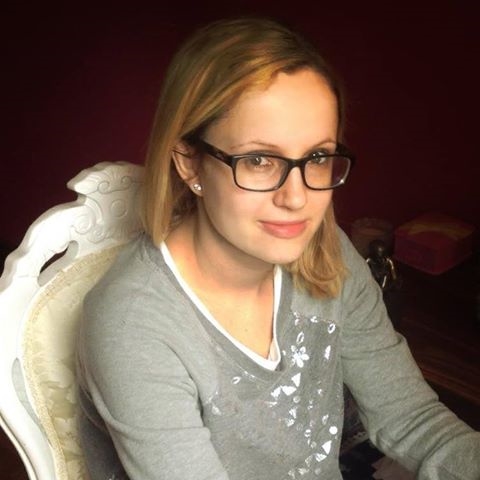 Carys Jones is a thriller writer based in Shropshire where she lives with her husband, daughter and dog.
When she’s not writing she can often be found indulging two of her greatest passions – either walking round the local woodland or catching up on all things Disney related.

This Blog Tour was organized by:
Orion Dash