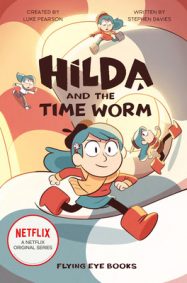 A delightful fun book that mixes three episode in one book. It is time for Yule, watch out for that time worm, and you better stop those BELLS!

I was so happy that there would be more Netflix Tie-in books, I really enjoyed the first three so I was eager to get the rest. Since I already had several books on my buy list I only got the first one, but I will definitely be buying the next ones real soon!

In this book we get a masterfully crafted story made up out of three episodes from the second season. Namely: Chapter 6 – The Old Bells of Trolberg, Chapter 8 – The Fifty Year Night, and Chapter 10 – The Yule Lads. Oh and a dash of Chapter 1 – The Troll Circle. There are also mentions to other episodes (like the Kraken or the snowstorm one). The main setting is from the Yule Lads episode as this whole book plays around the Trolberg Winter Festival. I absolutely loved how it was all woven into one story and how things were changed here and there to make it different from the TV-series. Like how it is Hilda who came up with the name for the Troll Bells operation instead of David. Or how Hilda was originally grounded due to a big fat Kraken instead of sabotaging (I would rather call it helping save magical creatures) bells. It was really well done and it gave some extra and new dimensions to the Hilda series.

It took me a bit to get settled because for me the Yule Lads and the Winter Festival didn’t happen in those first two episodes, but once I was settled in and saw it all just clicked together I flew through this book. I absolutely love that they were able to grab episodes and make something new. I had fun following Hilda on her quest to help someone with their date (not always a good idea), stop some bells from ringing (really, why did anyone think it was a brilliant idea to ring bells non-stop, you are not only driving away trolls (or get them angry) but you also anger and drive away your own peeps, because believe me I wouldn’t have stayed if bells kept on ringing on that insane level), find out about the Yule lads and understand that naughty and nice doesn’t mean kids are supposed to be kidnapped. And I loved seeing Hilda work hard to get a snowglobe for her mom, that was just the sweetest, especially since the item inside held such an important memory for both. I also love seeing Frida, Alfur, David, and many others. I loved getting to meet new characters and monsters/creatures from the land.

I would highly recommend these to the fans of the franchise and those who are interested in it! Also be sure to check out the amazing show and the graphic novels.