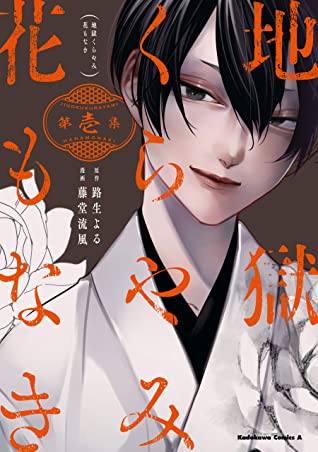 A spooky manga about a guy who can see people’s sins in the form of youkai. This turned very dark~ 😍

I was in a desperate need for some spooky-scary manga and well, I definitely found it with this one. At first it felt a bit like xxxHOLIC with a mysterious house, a mysterious owner, a boy who can see things/feel things. But then it turned more dark, more scary, it added a dash of Jigoku Shoujo, and I was just sold.

Meet Seiji, a guy who is a neet. Who due to stress and worries gave up on studies, gave up on everything. But one day he finds a road that wasn’t there. A house that is way too fancy and shouldn’t be around. And a boy who looks pretty but who I could immediately see hid something scary. Seiji can see youkai, even more specific, people’s sins as youkai. And that is perfect for Shiroshi who is in the business of a consultation bureau. A bit like Yuuko is. Trying to help people… but it is still up to them to accept that or not. I really liked Seiji. He was an interesting MC, I love his powers though I can also imagine how frightening they are, especially when you cannot look in a mirror yourself. I had a big laugh at how eager he helped Shiroshi out when there was the prospect of food or money. Then again, given everything it may not be a funny thing, but the looks he gave and the actions he did were just so priceless. XD

Shiroshi, OH BOY, I already had a feel about this guy, but then at the end of chapter 3… I definitely hadn’t expected that one to pop out. Haha, but that makes perfect sense and that gives a bit more danger to the whole story which is perfect.

In this first volume we have 1 complete arc and one incomplete one which I am sure will continue in the next volume. The first story is about a woman who is getting threats, but is she speaking the truth? Or is there more to it. I definitely loved that first arc though it was also a bit tough to get through it as it was about suicide a lot, so be warned! It was a really interesting story and each time that you thought you knew all there is, boom another thing happened and you would be left shocked. Don’t be betrayed by appearances. The ending to this arc was very shocking.
In the second one a house possessed by a Nue, but of course there is much more going on and as the story got deeper and darker and descended more in pandemonium, I was totally invested. I needed to know who would stay and who would go. Along the way we meet a smug man named Rindou, I immediately distrusted the guy. He was just too shiny and smug. And as we learn… I was right to distrust him. Loved that next to the arc we currently we have, we also learn more about Shiroshi and what he is/what is family is.
The ending! What a way to end this first chapter. HOLY CRAP.

I love learning more about the different youkai, I knew a few already but also met some new ones. Not sure if I wanted to meet them though. XD Plus, it was interesting to learn more about different kinds, what they do, how they look, etc.. Plus, we learn a lot about hell/demons. Also interesting!

The art, I absolutely loved it! The way the author drew the characters and the youkai was just perfect and I also love the attention to the background. The cover drew me into the manga.

All in all, looking for a spooky and dark manga? Try this one!