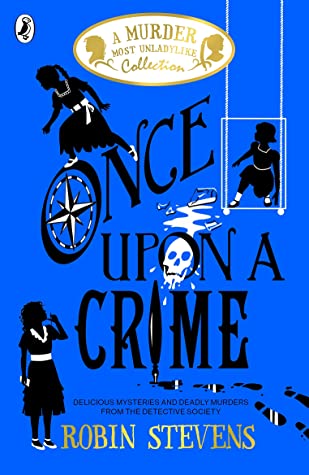 Our duo (and their friends/family) is back with a new book full of short stories. 4 of them are all new!

I am just so delighted that this book came out! I had to wait a bit before ordering it (was on vacation when it came out) and then wait a bit longer when I got it (because I wanted to read this during my Halloween month reading). But it was finally time and then I read it in one go. Haha. It was just too good and I was so delighted with all the short stories.

My favourite short story would be The Case of the Second Scream, with my least favourite story being The Case of the Deadly Flat. The Case of the Second Scream was just such a fun and exciting story and I had fun puzzling along with the girls and wondering if this would be a murder case (wouldn’t surprise me given how that follows our duo) or if it would be something else. However, there was one error. Sally speaks of hearing a scream, but Hazel writes down that it was a splash. It was a tad confusing. XD As for why The Case of the Deadly Flat was my least favourite story was because I am just not such a big fan of May in this one. It felt more that she wanted to be a detective not for her own but because of her sister. I have had a few too many times that someone did the exact things as I did, same hobbies or some interests, all of the sudden. Plus, I found it very very odd that Hazel never cared about what her sister said. It just felt off, because while I know that it is war and Hazel has a lot going on, I also think that Hazel would have been part of the mystery.

I loved the story about the Hound of Weston School, not just for the dogs and seeing Alex and George again and see them have a wonderful adventure, but also for what more is said. Something that should have been said a long time ago. I am so proud of Alex. Good job!

And the Uninvited Guest story was so fun to read. Tame and light, but I liked it!

While sad, I did like that the story, that time continued. I am curious what is next for our duo now that WWII has really started. Throughout the series we did get some mentions about things happening, Hitler was mentioned, but it isn’t until the last story (The Case of the Deadly Flat) that we get confirmed that the war has truly started.

I also have to mention that I am FREAKING HYPED about what was mentioned on that last page! I was already mourning this series, thinking I would have to say goodbye to the series. But we get more. I do hope it features Hazel/Daisy, because otherwise I will still have to mourn. XD

All in all, if you are a fan of the series and have read the other books (make sure of that because these stories take place around the end and at the end of the series), be sure to check out this book!