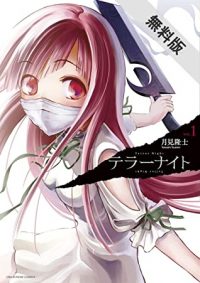 I never knew my Kuchisake-onna could be so cute. A fun and at times scary manga perfect for Halloween.

In this one we enter a world where urban legends, so called terrors or rumours, are very much real. Though people don’t seem to be afraid of them that much for some odd reason. Most are even going to find them and get pictures of them and such. Really, don’t ask why, I know I wouldn’t do it. Meet Sei, a boy who is totally not interested in occult (due to family stuff) but then one day meets up Kuchisake-onna and well… he is now forever stuck to her. It was hilarious how they went on a date and I had a bigger laugh later on when things get a bit scarier. You really have to watch your words around her. XD She is one strong girl.

I loved how the manga was partly just funny and cute with Sei and Kuchisake living together and Kuchisake making food and her mouth at times go from cute and small and normal to slit and it just didn’t look scary but silly, but then would go to the dark side at times. Like with the guy who did exorcism. Well.. don’t go to him I would say. XD

I did get some Fate/Stay vibes with this one as soon as we got some hints about what happens to terrors.

I love how the title テラー means both terror and teller which is perfect for this manga which is about the monsters called terrors and the humans named tellers who are possessed by the monsters.

I didn’t like either Sei’s sister. She is just seemingly freeloading and living on her highschool going brother parttime earnings and spending it all if she comes across something cool. WTF girl? Get your life together. I would have kicked her out and changed the locks so fast.
And then there is Nanami who I just found rude and way out of place. I mean, hello, the guy has NEVER shown any interest in you. You are just friends, yet she does such creepy stalker things. She does get a bit better in the chapter, but I still don’t want to see more of her.

The art was really nice. I especially loved how Kuchisake was done, but also liked the designs on other characters.

There are still some questions I have about terrors and tellers and how it all started, what other terrors/urban legends are there, will things get scarier because while I loved the funny parts I am craving for some scary stuff!