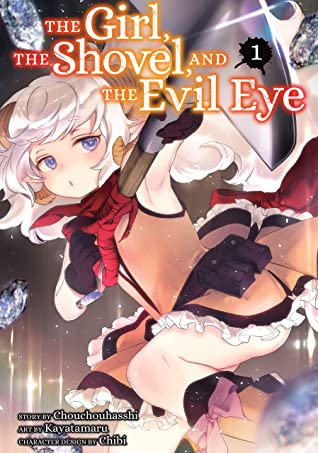 I received this manga from Netgalley/Kodansha in exchange of an honest review.

SO the cover was what sparked me along with the title. I mean, The Girl? The Shovel? and the Evil Eye? A very specific title. It sounded like an isekai, and while I a tad tired of all the isekais at times, I also knew I couldn’t let this one slide by.

In this one we meet a teen named Tsuguto. He is a very nice guy… maybe a bit too nice because as you can read in the blurb he died in a bus accident (he was the only one standing and so wasn’t prepared when the bus hit something). We see how he is reincarnated in a new world. A fantasy world and then specifically a mining camp. I loved seeing him discover the world and how it works. From tags to currency to mining and levelling. And he isn’t alone, because during his first day he meets with a cute girl named Loulier and together they go through their daily lives and try to get stronger. I really liked both characters, Tsuguto who is trying to be tougher and less nice (though he still plenty of nice, he is just doing it at the right times instead of all the time). Loulier who is adorable but who has a past, but is also tough. I mean, not many girls would stand up to an evil dude, but she does, even if she knows the consequences. 🙁

There were a couple of times that it was a tad gruesome. There is some violence (that evil dude really will go far), but also how the monsters were killed in dungeons, HOLY CRAP, can we just go back to less over the top stuff, haha, my stomach is still not better. XD I mean eyes plopping out, a shovel through a spider, and to have proof we saw them cut off parts. Normally not so squeamish, but I just didn’t expect it.

Also, while I am OK with pushing someone to eat their veggies, I was a bit eh on the pushing a sheepfolk (or well, I think maybe I had it with anyone) to eat meat. To specify, I am not a pushy vegetarian, heck I cannot even be fully vegetarian due to health, but it just feels a bit weird to push someone to eat meat. If they really don’t want it, just leave it.

The ending, OMG, why are all the manga I read today ending on a cliffhanger. XD This is my fourth manga and so far all of them had this. ARGH. Could I just get a break?

The art was pretty good! I liked the character designs and how the world looked!

All in all, I really enjoyed this manga, a bit gruesome at times, but in overall very fun and I love Loulier and Tsuguto together, discovering the world, earning money, and more.