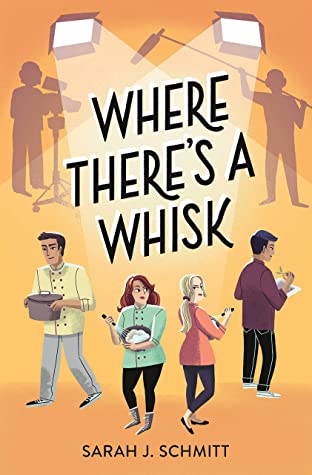 Things I was a fan of:
😍Peyton was such a fun and interesting character. Yes, she was very insecure, but I love that she slowly got stronger and more confident. That she stepped up. That she never gave up no matter what was thrown at her. I loved that she spoke up in later parts. I loved seeing her explore New York and discover that there is a better future for her in store. That she is getting chances and that she has to take them. That she can be more then what people assume about her, that she is trailer trash.
😍All contestants except for Dani (duh) and I am still unsure about Adam. But I did like the rest of the crew and see what they made and what made them tick. They are a fun cast and I found myself rooting for them~
😍The food/the cooking. The food made sounded just so good that I wanted to step in. OK, it would mean asking very specific questions on what is in the food (allergies yay…), but I would love to dig into several of the things that were made or that the teens tried while in New York. I loved that these kids knew so many things just out of memory. I mean, I know quite a few recipes, but I just wouldn’t be able to make things like they did. I would definitely need cook books or notes or other things to help me.
😍The reality show. While I also have some negative points for that, I did enjoy quite a lot of elements. The challenges, the Landmark challenges, some of the extra stuff that made things a tad more difficult (had such a big laugh at the tiny kitchen).
😍New York! A city I would so love to visit one day… but probably never will given how the world is burning. But I had fun wandering the city with the teens, see them do all sorts of fun things and visit all sorts of landmarks and events. Definitely loved the zoo and the cute lemur!
😍Romance. Yes, I am not a fan of the love triangle. But there were elements there that I liked, especially those developments much later in the book. I won’t tell much more than that, but yes, I was squeeing in delight at the things that happened. FINALLY!
😍Loved getting background information on various characters. Always love it when characters get developed more and not just the MC.
😍The ending was just so sweet and fun!
😍The tradition the group started after the first elimination!
😍The rooftop moments.

Things I wasn’t such a fan of:
😑Angelica. This judge was just horrendous and I really wonder why she hated Peyton so much, I mean she reacted fine to most of the other contestants it seems, but she was constantly bitching about Peyton. And she didn’t even try the food, or only mouse bites which is just not enough if you are doing a good honest judging.
😑Love Triangle. Yes, I would call it that. People who have read my reviews and know me for a bit longer know I am never a fan of those things.
😑Dani. OK, that changed a bit at the end, but for most I just wanted to throw a few pies at her face for each comment she made. Little prissy princess. Bah.
😑I wasn’t a fan of how manipulative things were in the competition. I get that this is a reality show and we all know how messed up those can be, but I had hoped that with a teen reality cooking show things would be a bit kinder and friendlier, but this was just horrendous at times. They went very far at times and I just found a lot of things unfair.

Also, while I did love seeing Peyton lose at times, get close to elimination, because it just made it a bit more real, it never felt like a threat. I mean, she is the MC. I mean, I knew from the start that they wouldn’t eliminate her from the show, not until the finals at least. So yeah, I like that the author tried adding some tension, it just never felt like tension. Hope that makes sense.

Despite those points, as you can see I did have plenty to love and I am really happy I requested this book. It took me a bit long to start reading it, but I am happy I finally took that leap and started reading it. It was fun. There is romance. Food. I just cannot resist a book about reality shows. I would recommend it.