A big welcome to the Blog Tour for The Singles Table by Sara Desai! A book I really want to read, it sounds cute, funny, and with great characters. So happy I can be part of the tour!

For today’s post I got book/author information + an excerpt! 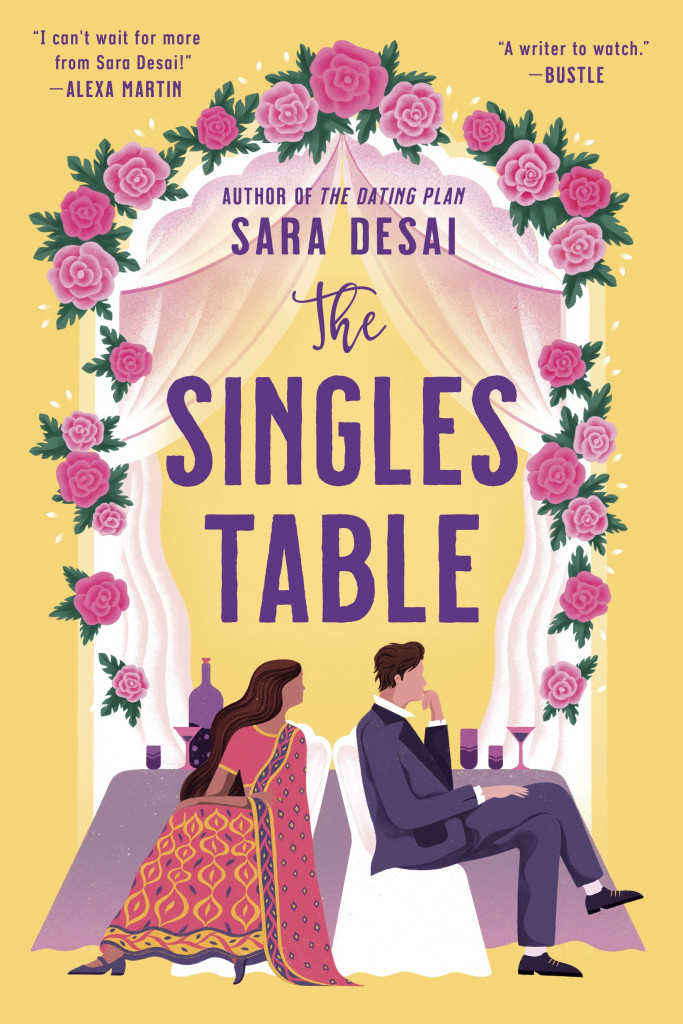 Opposites attract in this laugh-out-loud romantic comedy about a free-spirited lawyer who is determined to find the perfect match for the grumpy bachelor at her cousin’s wedding.

After a devastating break-up, celebrity-obsessed lawyer Zara Patel is determined never to open her heart again. She puts her energy into building her career and helping her friends find their happily-ever-afters. She’s never faced a guest at the singles table she couldn’t match, until she crosses paths with the sinfully sexy Jay Dayal.

Former military security specialist Jay has no time for love. His life is about working hard, staying focused, and winning at all costs. When charismatic Zara crashes into his life, he’s thrown into close contact with exactly the kind of chaos he wants to avoid. Worse, they’re stuck together for the entire wedding season.

So they make a deal. She’ll find his special someone if he introduces her to his celebrity clients. But when their arrangement brings them together in ways they never expected, they realize that the perfect match might just be their own.

Sara Desai has been a lawyer, radio DJ, marathon runner, historian, bouncer and librarian. She lives on Vancouver Island with her husband, kids and an assortment of forest creatures who think they are pets. Sara writes sexy romantic comedy and contemporary romance with a multicultural twist. When not laughing at her own jokes, Sara can be found eating nachos.

“So what kind of woman are you looking for? Let me guess. Professional. Sophisticated. Classy. Intelligent. Basically, Lucia but younger, or do you like a little Mrs. Robinson between the sheets?” She took another bite of her hot dog. Was there any better food?
“My relationship with Lucia is strictly professional,” Jay said. “But yes, I’d be interested in someone similar.”
“So, you want a mini-me,” she teased. “I mean a mini-you. Not me. Obviously. Lucia is pretty much the opposite of me, which is another reason I knew that job wouldn’t work out.”
“You have ketchup on your cheek.” He took a napkin and gently dabbed it at the corner of her mouth.
Desire flooded her veins followed by a wave of desolation. She could easily fall for a man like Jay. Smart, handsome, ambitious, successful, and yet she sensed a longing in him, a secret Jay waiting to be free.
“Is it gone?” Her voice came out in a whisper.
He leaned in and studied her with a serious intensity that took her breath away. He was so close she could see the gentle dip in his chin, the dark stubble of his five-o’clock shadow even though it couldn’t be much past four o’clock. His lips were firm and soft, his mouth the perfect size for kissing. She drew in his scent: pine and mountains and the rich, earthy scent of the soil she’d turned in the garden when her family was whole and she never had to wonder whose house she was in when she woke up in the morning.
But this wasn’t the time to be thinking about being held in Jay’s strong arms or what it would be like to kiss him, or how just being near him calmed all the wayward thoughts in her head. She was supposed to be concentrating on finding him a match and where she should get autographed when he made the promised celebrity introduction.
“We should go.” She jumped up so abruptly her half-eaten hot dog fell to the grass. “I have to get back to the office, and I don’t want to exceed your two-hour-and-forty-five-minute time limit.”
Jay picked up the hot dog and carried it to the nearest bin. “When do you want to meet again?”
His question sent a curious thrill rocketing through her veins. She hadn’t put him off with her rambling, or her quest for the perfect hot dog, or even the uncomfortable questions she’d asked as they lounged in the sun. She couldn’t have been more excited if he’d asked her on second date. Except he wasn’t really interested in her that way, and she needed to keep that in mind. The last thing she wanted was to get into a Cyrano situation where she would be forced to help someone else win the heart of the man she loved. She made a mental note to rewatch the 1973 Broadway version of the play with its soaring ballads and rousing word- and swordplay as a reminder of the heartbreak that could result.
She pulled out her phone and pretended to study the screen to stop herself from saying something stupid like how about tonight? “Hmmm. I have a big settlement meeting on Friday so the rest of my week is shot. I’ll have to let you know.”
If he noticed her cool dismissal, he didn’t react. Instead, he said the one thing that would ensure she wouldn’t be able to sleep until she saw him again. “I’ll be waiting.”