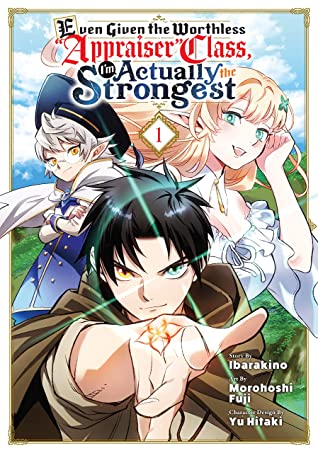 I received this manga from Kodansha/Netgalley in exchange of an honest review.

Haha, I just couldn’t resist this long-ass title manga. I was very curious about this Appraiser class (sounds like a fun skill.. but not sure if you want it as your class) and how this guy got strong! Also cute girls on cover help. XD

Meet Ein (awesome name) who is from the Appraisal class and treated like shit. Then again, I did find it odd that he didn’t even had any fighting abilities or defending abilities. He was just sitting there and waiting for his party to be done. It was not really the right way for me to start to get to know this character. I don’t mind a bit more passive character, but I would like my characters at least be able to do something. Still, I felt sorry for him because his party members treat him like utter shit. Really, those two are the worst and we see just how bad they are later on in the first part. Holy crap. I get that Ein is pretty useless but that is still not the way to go.

Thankfully, Ein does get a second chance (and maybe even a third given what happens after that second chance). It was a bit gory how things went, to the point that I was just hoping that the manga wouldn’t all be about blood and losing ears too much. I loved that he got a new chance, not sure how he feels about it all the time given his instructor XD, but I am sure he is happy that he can prove himself and learn something useful and good. I found myself rooting for Ein to learn some new skills and get better. Get stronger, but also more confident. Because he also doesn’t have a lot of that.

I loved seeing the appraisal skill get more and more useful. From just being able to do some appraisal and see if there was loot to copying skills and being able to do them. Now I also want this form of appraisal. Give it to me! Well, minus the pain, because DANG that looks too painful.

I also loved the other characters, innocent and adorable World Tree spirit/however it was called Yuri. And then there is her “mom” the guardian of the tree. Two more different personalities cannot be found. I just love how supportive Yuri is and how sweet and cute and how she is always there for Ein… while Ursula is more the die-hard I will train you until you die type (with a vengeance) + she is a big love for Yuri and will do anything to make sure Ein isn’t doing anything unsavoury to her (though she even counts talking and getting a bit too close unsavoury, so um).

This manga is pretty much introductory to Ein, Yuri, and Ursula. The real adventures will start in the next manga. Now that Ein is powered up he is ready to face the world. I hope that things will go well for him. He deserves that after all the shit in the beginning and all the death training with Ursula.

The art was OK. At times I really loved it (Yuri’s design, the facial expressions by the characters (Ursula has some great ones), but at other times it just looked rushed and unfinished.

All in all, this was a pretty good, action-packed and full of fantasy, manga and I will keep an eye out for more of this series. Curious how things will go next.