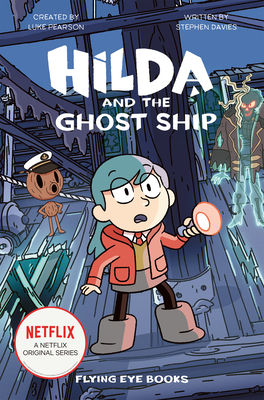 Hilda and her friends are back for three new adventures! Witches, crazy plans, Krakens! Oh yes!

The fifth Hilda book tied in with the Netflix series and this time we have 4 episodes into one story. Chapter 2: The Draugen/Chapter 3: The Witch/Chapter 5: The Windmill/Chapter 7: The Beast of Cauldron Island.

Sadly, I do have to say that whereas it worked for the previous book to put many story-lines of episodes into one story (in that one it was 3 and few bits of others, in this one it was 4 episodes though one got used only for one chapter), it didn’t work in this one. It just didn’t feel like one connected story, instead it felt chunky and unnatural, at times it just didn’t click together. For instance with chapter 1 being about the librarian and the big secret what she is but then we just skip all of the important stuff and go to chapter 2 with David and the Windmill. I would have rather seen it connect better, get more insight in what happened in chapter 1.

But despite it being a bit chunky/unnatural, I did love seeing all these stories in one book and I did like how well they fitted together. Also, I love love that there are changes done so that even if you watched the series (like me) there is plenty of new details or new things to make you want to keep reading. It is like you get a new story with old elements. Love it! Like The Windmill is now mostly about David, while it was also about Frida/Hilda. At one point Hilda has to convince a weather spirit to help her out and whereas in the series she makes it angry… she makes it laugh with terrible Woodman jokes in this one. With the final battle at the end… well it was much more dangerous and scary and the book also doesn’t omit how bad it went for the Patrol. But, there are also things that I missed, like seeing the Draugen get reunited, that was one of my favourite parts in the series. Or that we didn’t see the elves help out with the Lindworm.

I had fun seeing everyone again. Love that Hilda is also growing up in the book, finding out more about responsibilities, what she shouldn’t say at times, and more. Love that Frida is now doing training to become a Witch. And David, David shines in this one as he is really brave in this one and I was just rooting for him!

The art was once again perfect.

All in all, I am still very very happy with this story and I will definitely be buying the sixth book and then hoping very hard that we get a third season + new books!