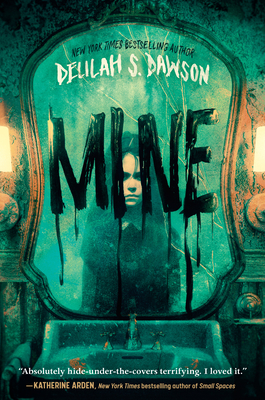 An awesome cover, a spooky story, but sadly there were things I wasn’t such a fan of.

A book I mostly bought for the cover. XD The blurb was good, but just look at that scary as heck cover! It is perfect!

A 12-year old girl and her family move to a new place, far away from her own. Welcome to Florida. As soon as they get there it is clear that a lot of love is needed for the house. It was a hoarders house (which is both sad but also something that I like (is the the correct word, not sure) reading about). And not only that… something spooky is going on and I was fully there for it!

Lily was a fun character though at times I did get a bit annoyed that she felt she had to make a show out of every story. I get it, you like drama and musicals, but please just tell me the honest story, you can always re-enact it with a flair afterwards. I did feel for her. Apparently something happened months ago, something that still haunts her family. And then she gets stuck in a disgusting home with a spooky resident who is not happy to see her. I loved that she kept going on, even got angry at the ghost which I just both found hilarious and brave. I mean, I am not sure if I would have gotten angry, but probably. Hello, ghost, not like I have a choice in this matter of staying or leaving. XD I loved how she was with Buddy (the dog she finds outside), I just love how she tried to feed him and care for him and make sure he would know he had a family again. I was proud of her for trying her best and making something of what is going on, sometimes with drama yes, but sometimes also just natural Lily. I definitely was rooting for her to solve the ghost problem and find a way to get her house un-haunted.

Along the way I just loved reading how the house got cleaner and cleaner. I could just imagine the house and that is something I love. Plus, I liked finding out what was in boxes and other things, we don’t find out all the things, but we did find out about several items. Including photographs.

I loved finding out more about the ghost, though LORD my heart just broke for both of them.

Issues I had that kind of a lot ruined the book: The toxic/emotional abuse of the dad. Man, that guy was just infuriating and when we find out later what happened I was just pissed at him even more. I thought the girl committed some horrible crime given how he acted around her, but instead it was just a mistake and I am still not even sure if it was truly her fault. I didn’t like the ending and the resolution the girl decided to go with, that is not how to solve this problem. Neither were some other things Lily did to appease her parents. It just creeped me out. The mom was OK, but I wasn’t a fan how she stayed on her husbands side and how she at times just seemed to ignore her daughter. Or how she reacted around her husband which was just a big WTF why are you still together flag for me. Oh, and also the fact that the dad apparently let his 12-year old daughter and wife just clean up a whole fucking hoarders home and didn’t even care to stick out one single hand to help them. It is also your home. Do some stuff after you work if you cannot take a day off. I don’t care how tired you are, you cannot let your wife and kid just clean up all that shit for you. No, just no. I hated how the parents talked to their kid at times. When she wasn’t feeling happy. Yes, Lily at times exaggerates things and that is not good, but to scream at her? Or to call her a little dramaqueen? Or other things? I was just stunned that those parents did this.

So yeah, good things in this book ,but sadly also bad things. So I am still unsure how to rate it. If I look at the ghost-aspect of the whole thing, the creepiness, the hoarder house with stuff going skitter and squish, the sudden storms, then 4.5 star. But with the dad and the mom and all that crap? 2 maybe 3 stars. For now the book can stay on my shelf as I love the cover, but after Halloween I may just put it in the part of the room where books go to be sold.