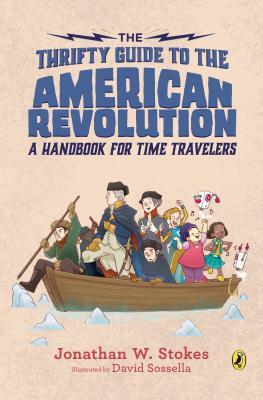 My fourth Thrifty Guide and this time we are heading into the American Revolution. How it started and how it all ended.

I was very happily surprised when I found out about this book. The other books have been translated to Dutch and are found in stores and libraries here and so I thought there weren’t any others. So imagine my delight to find another book in the series. I guess I can understand why this may not have been translated and the others have. The others are subjects that are much more popular with the kids here, more known as well, I don’t think a lot of kids here would care about the American Revolution.

In this book we learn all about the American Revolution, and while I did have fun reading it… it was also a tad boring at times. Whereas I greatly enjoyed the other three books and gave them 5 stars (and would even rate them higher), this one is more a 3, maybe 3.5. I mostly picked this up because it was Thrifty Guide. But whereas the other books dive into so many paths concerning their topic, this was just battles, battles, famous dudes (and some ladies), battles, battles. I get that it is about the Revolution, but I would have liked maybe a bit more on the whole what people do in their daily life, jobs, how cities grew, slavery/the slaves who freed themselves. Just like how the other books showed battles but also other important topics.

But there were fun parts about this book, mostly the stuff made to look like a review for a place or some hilarious bits on how you could change history a bit by adding x or y. Or the parts about the time travel. Though I also did like reading about some of the famous guys (and girls) in the AR. And sure, some of the battles were pretty great, especially seeing how the American army went from tiny and very ill equipped and no battle experience to more and more skilled and better at tactics and with more weapons.

Maybe this book is more interesting to an American or someone who is into the subject or loves reading about battles, but for me it just wasn’t that interesting. Sadly.

This one is going on the sell/donate stack (should really get to setting up something for that). I do hope that Jonathan W. Stokes makes more books in the Thrifty Guide series, I would love a book about Egypt.