A big welcome to the Blog Tour for Keisha and the Rise of the Legacy by T.R. Tells! Very excited to be part of the tour~

For today’s post I got an excerpt from Chapter 2 + book/author information. 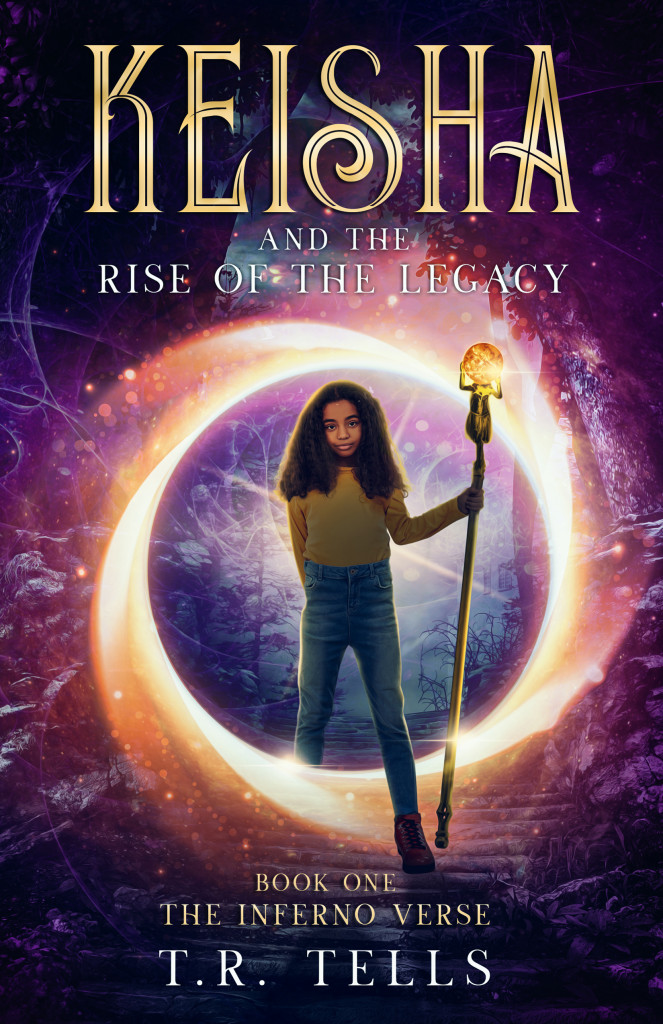 What would you do if you found out that magic and monsters were real, and you were born to stop them?

14-year-old Keisha Alighieri thought she was just a normal teenager and that her biggest problems in life were what outfit to wear to school. But when her mother is kidnapped by an evil society, secrets get revealed that will change Keisha’s life forever.

Keisha finds out that her papà, Dante Alighieri, and his bloodline are hunters and protectors of the Inferno world. Keisha decides she will do anything to rescue her mother…anything.

She is joined by Verona Maro who acts as her guide and mentor as they pass through the portal to the Inferno realm. There, they will face monsters that she never thought actually existed.

However, even more trouble is just around the corner. The Monarchs are plotting to turn Keisha to evil and use her abilities to unlock an ancient power that will help them control the world.

Will Keisha and Verona be able to overcome the impossibly dangerous obstacles that stand in their way? And will Keisha be able to save the Inferno and become the Legacy she was born into? 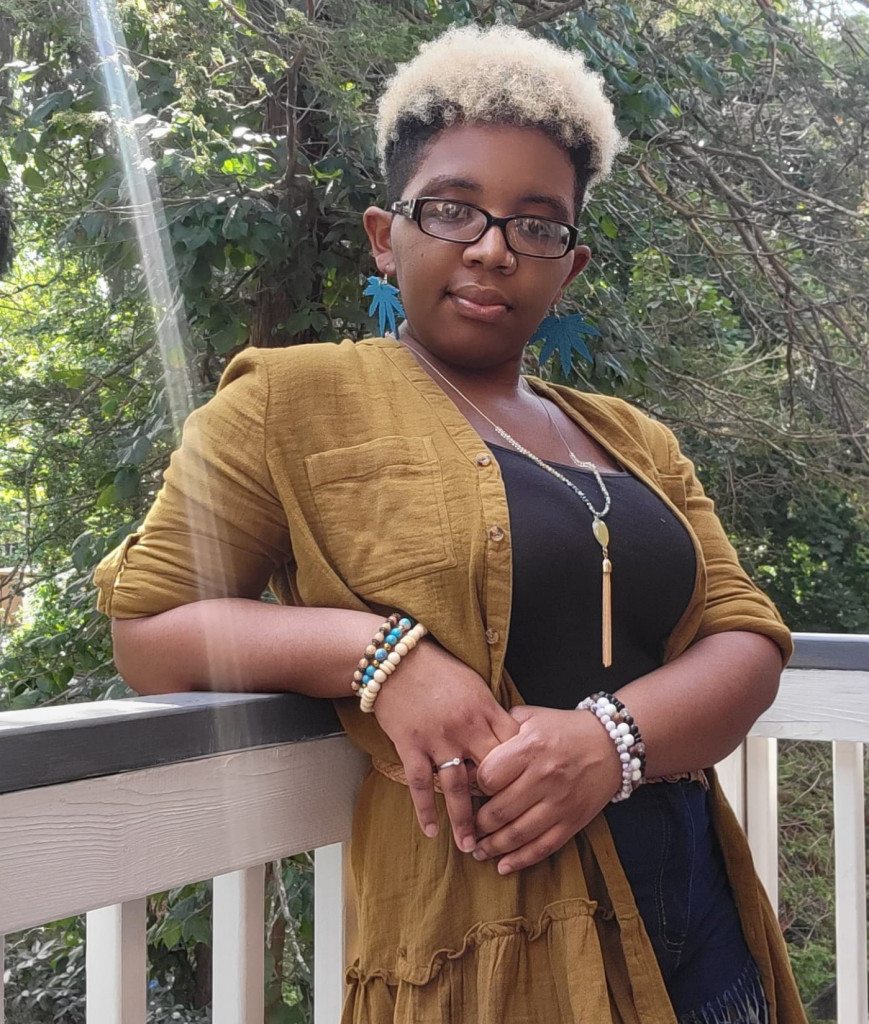 T.R. Tells chose the pen name created as a play on words “T.R “TELLS a story”. She’s a book-lover for anything fantasy (but will try any genre) and created her first story at 11 years old. She currently lives in upstate New York with a Bachelors in Fiction and Creative writing. In her free time when she’s not creating infinite worlds in her writing, you can find her binge watching Netflix and being an Otaku (anime) lover.
Her first Middle-Grade Debut “Keisha and the Rise of the Legacy ” combines her love of anime, fantasy, and the Black and LGBTQIA+ representation.

Keisha was sprawled out on the ground, with her cheek pressed into the cold earth. She opened her eyes, lifting her head to see a dark forest around her. The sweet and sharp citrus smell stung her nose, making her sneeze. She pushed herself upright, looking around the eerie and silver trunked woods. “Where am I?” Keisha murmured to herself. She wrapped her arms around her shoulders.

“You’re in the world of the Inferno, specifically, the Dark Woods of the Illicit, a region in the Inferno.”
Keisha turned to see the girl, Verona. She was standing with a disgruntled expression on her face. She tucked a strand of her brunette hair behind her ear.
“I’m sorry, the what?”
The term was unfamiliar, and she hadn’t heard it in any books or on television. Verona narrowed her eyes at Keisha. “How are you not aware of the Inferno? You wouldn’t be able to see me, otherwise.” There was a pause as she sucked her teeth. “Or perhaps you’re more than an Earthborne. There are others with profound abilities, like Guardians, out there—what is your parent name?”
“Uh, if you’re asking me my full name, it’s Keisha. Keisha Alighieri.”

Verona leaned into her, so the two were nose to nose. The bug-eye expression caught Keisha by surprise, blushing a deep shade of red. Keisha could see that the Iris’ of Verona’s eyes were like
the darkening part of an ocean and a hint of gold. “Is it true? You are the Daughter of Dante Alighieri, The Dante.” Keisha wasn’t sure what she meant by that statement.
“Sorry? I don’t know what you mean. He’s my papà. He was a Professor that studied philosophy and foreign languages, but I haven’t seen him since he disappeared two years ago.”
Verona leaned away from Keisha. Yet, her skin prickled from their close encounter.
“And you know nothing of the Inferno or what you are?”
Keisha shook her head. “What I am? What do you mean?”
Verona stiffly nodded. “Yes, you, Keisha, are a Legacy.”
Keisha frowned. “A Legacy is a child of a Shikari that maintains the balance and keeps supernatural creatures—known as Demi—from escaping through the veil to Earth. My papà, Virgil, and
your papà were some of the greatest Shikari’s in the Inferno, and it falls to us to continue the line.”
Verona stood to her feet. “But we should hurry. We shouldn’t linger in one place for too long.”

She held out her hand for Keisha. Her jaw hung open as her mind tried to wrap around the information that had been told to her.
“This…this has to be a joke, right? Is this a prank?” Keisha laughed. She looked around the looming shadowed forest that hovered over them, expecting cameras to pop out.
“A prank?” Verona didn’t smile. “You just came through a swirling portal of your own free will. Surely, this doesn’t seem like any prank an Earthborne would pull, does it? By all means,
stray from the path and go see for yourself.”
Keisha pressed her lips. She figured Verona would let her, but she didn’t want to test the theory in case something did come after her.
“Follow me,” Verona said and walked past Keisha and into the tangled grove of the forest. The sharp branches caught Keisha’s afro and cut along her cheeks. She swatted at them with her hands and, after some time, lost sight of Verona. Keisha was alone. “V-Verona?” Keisha quivered and tip-toed along the black, frayed grass. She peered into the darkness, hoping to spy Verona’s lustrous brown hair. She didn’t want to see what lurked through the darkness of the woods.
Keisha gulped. She was shaking, and the silent creepiness didn’t calm her nerves. Everything was too quiet, and that was never a good sign.

The snap of a branch forced Keisha to spin around too fast and gave herself whiplash. Her big amber eyes stared at the spot that had made the noise. “Verona?” A low growl drained the color from Keisha’s face. A creature stepped through the grove on all fours. Its back was spiky, and its triangular ears were pushed back. The creature barred its fangs menacingly, and then four more pairs of yellow eyes emerged from the forest. One creature jumped through the air. Keisha screamed and ducked, covering her arms over her head. She waited for the marring of the creature’s sharp teeth to dig into her flesh, but instead, someone shouted, “Scintilla di Fuoco.” Keisha recognized the Italian word Spark Fire followed by a whimper. Keisha removed her hands from her head and peered to see someone standing above her, shielding her. On closer inspection, it looked like Verona, but she wasn’t the same. This Verona looked more muscular in her arms and legs. There was a silver circlet on her head like a crown and a silver-plated armor, skirt, and caligae sandals on her feet. She held a staff in her hands that illuminated a bright white
light.
“Beasties,” Verona said to Keisha. “Pesky canines that scavenge for food, they rarely attack humans, but their bite can be devious—the only way to get rid of them is by light. Weirdly, they’re out here.” The remaining Beasties left into the shadow of the forest as sparks of fire petered out. The smell of smoke and burnt hair lingered in the air.
Verona returned to her un-armored form. She held out her hand for Keisha to take. “You need to be careful. You’re a long way from home, and you could have been killed.” Keisha grasped Verona’s hand, and she stared at Verona, who tilted her head to the side.
“W-what was that? You changed into an armored lady and back again! Did you just do that fire trick too?”
Verona smirked. “The power of a Legacy—come on, we’re almost there.” 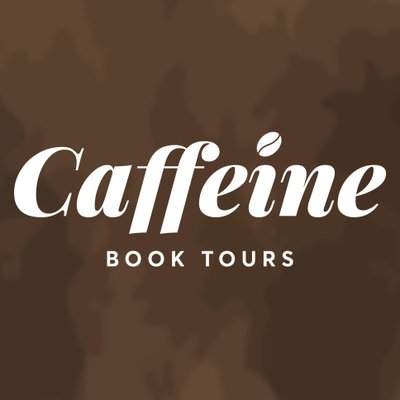