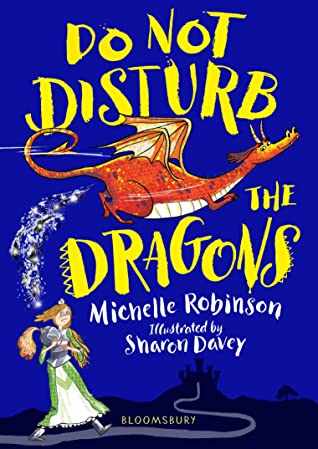 A laugh-out-loud book about unicorns, troll ball, rules, and princesses who want to do something different. Oh and poop. Tons of lucky dragon poop.

I don’t know why I waited this long to start this book! I got it almost 3 weeks ago from Library #3 and really, I should just have read it from the start because this was just freaking hilarious and fun and magical!

Meet Grace, an adopted princess who would much rather wear pants/trousers, participate in the local sport of Troll-O (a sport where you hit around a trollball, no worries, they don’t feel anything), and do all the other fun things she wants. Her sister is the same. She also wants to do more than the rules allow. And in this fun book we see how two girls defy the rules and just kick some serious ass. I really had fun reading this one, it is much better than the other fantasy children’s book I read about a princess and rules and wanting to be more. That one pushed it so much, that one also was way too judgy on things. This one however showed that the rules weren’t that fair, showed that everyone should have a chance, but didn’t shove and judge. It was just all so much fun and I was rooting for the girls.

I loved seeing the girls do their own thing and train very hard for the big important day in the kingdom when a big competition of Troll-O was played. Finding a unicorn, making me laugh that Portia got the elegant one whereas Grace got the one who looked like poop. Fitting for her given how often she gets some lucky dragon poop donated unto her (poor thing). See them figure out armours, and all  the other things that go with the sport.

Seeing the rules, I would have done the same as the girls. Hello, there is even a rule for no ice cream at breakfast. WHUT. Now, I don’t think I ever ate ice cream at breakfast, but come on maybe you suddenly get a craving? And there are other rules stating all sorts of things and restricting life quite a bit. The boys really get into it to the point that I wanted to yeet them in the moat. Though I would feel sorry for the mermaids living there, then they are stuck with them. XD

The chapter titles were just the best! Extra points for those as they made me laugh quite a bit and I love how creative/original they were.

I was worried about the dragons though, because it did seem like they were reacting to people breaking the rules! I was curious if this was true… or if something else was up. I won’t spoil anything, but I definitely hadn’t expected THAT to be the case! Love it!

The illustrations were fabulous! Fitted very well and brought the story to life. I just love how the two girls were drawn. Grace always a bit messy, Portia the picture of a princess.

There is tons of magic in here, great friendships (including one with the stableboy who can do some fantastic magic just like his dad), tons of poo, lots of fun sports, and two fantastic characters named Grace and Portia! I would recommend this book to all.