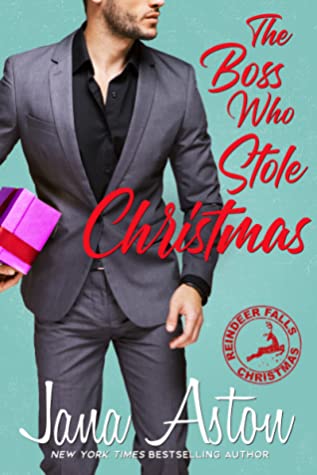 A grumpy boss, a girl who hates to love him, and a lot of Christmas.

Meet Holly Winter, yes, really. She is working at the most fantastical place that I also want to work at, Reindeer Toy Company. Bears! Cuteness! Toys! Planning Bear Cafes and more. However she isn’t too happy with her boss, Nick. Though on the other hand she does seem very happy with him, teehee, given the fantasies. We see how she struggles with working with him. We see that she isn’t happy despite having the best job.

The sexy times in Germany, OH MY GOODNESS. Those were STEAMY and HOT. I was happy that Holly was able to put off her mind and that she just enjoyed it. Enjoyed the kisses and the sex. I had such a laugh at how she called her vagina the Inn and even gave Nick ratings. XD And that Dickmas Advent Calendar her sisters made came to good use. Teehee.

But whereas I did like the romance, the sexy times, I just wanted to shake Holly a lot of times. Because she was just mean and hurtful towards her boss who, from my POV, was a bit grumpy yes, but for most he was hardworking and just doing his job. I just couldn’t see why she was constantly calling him Grinch and other things. And then her reaction after what happened in Germany, LORD, she was horrendous I just fell for the guy. He gets the feeling she is going to sue him. 😐

I did think it was a bit odd that he found it weird that she never had gone to visit the German company. I guess the previous boss didn’t think it was necessary, and given that she doesn’t have a passport or endless supplies of money I cannot see her go on her own. Just because you travelled the world and have all the money doesn’t mean everyone else can…

Other things I enjoyed. Reindeer Falls. Such a wonderful place and I want to visit, though I found it odd that it didn’t have a Christmas Market. Given everything you would think that is one thing they would have. I loved Holly’s sisters and enjoyed their banter when we saw them. Had a laugh at several parts of the book (found some great quotes). Loved that they went to Germany and had fun seeing them walk through the towns. I LOVED when Nick said something in German and I was just punching the air as I can read German. XD I loved the names of the characters, they were just all perfect for the town and the Christmas setting. I love the cover. The ending was just perfection (Be brave like Rudolph).

In the end, I did enjoy this one, hence the 3.5 stars, but it could have been more if Holly pulled that stick out of her ass and stopped thinking all those hateful things sooner. And not through the entire book.