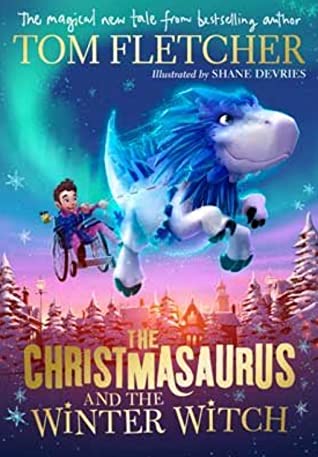 It is time to save Christmas!

I got this book late November from one of my libraries but wanted to save it until this week! I thought this would be a perfect pre-Christmas read, and it was!

The first 200 pages? I just flashed through that. We get a dark dark prophecy. And then we flash to the now, we see William and his family again (yes, including Pamela and Brenda), it is almost time for Christmas. As you can imagine Bob (William’s dad) is going all out for it! And then a big surprise because Santa is here! To fulfil wishes, to give a tour, and more!~ I really had fun visiting the North Pole and I just love to see the elves again (and I keep on laughing at their very fitting names). At times I just wanted to step into the book and just BE THERE. Be at that magical place!

The book went a bit downhill for me after 200 pages. Brenda was just annoying again. Making dumb mistakes. And I also wasn’t a fan of the villain and who the villain was. It was just too obvious. Not to mention I just wanted to punch the guy. I don’t get how people swallowed his lies like that. How easily they were swayed. Like WTF people? Get a grip! And then something horrific happens and I was just gasping! NO! Don’t let the prophecy come true that we saw at the beginning! Nooooooess!

Yes, I was crying during certain parts of the book (in which William goes back to the past). That is all I will say, those who read it will know.

I was so proud of William! Rooting for him so much! I mean, not every kid would have done what William does. I love that he and the Christmasaurus make a wonderful pair.

Oh, and I love that the Creakers is mentioned, that made me smile!

All in all, a very fun and adventurous Christmas read with tons of saving Christmas, brainfreeze, and a wonderful blue dinosaur! Recommended.