EEP! Hello! Welcome to the Blog Tour for Kelcie Murphy and the Academy for the Unbreakable Arts by Erika Lewis!! I am so HYPED! This book sounds so awesome, magic, warriors, missing parents, a school to train people, sign me up!

For today’s tour stop I got an excerpt! And I also got a fun giveaway which is open INT, you can win a copy of the book or a gift card! Oh, and I got book/author information.

Let’s get this tour on the road~ 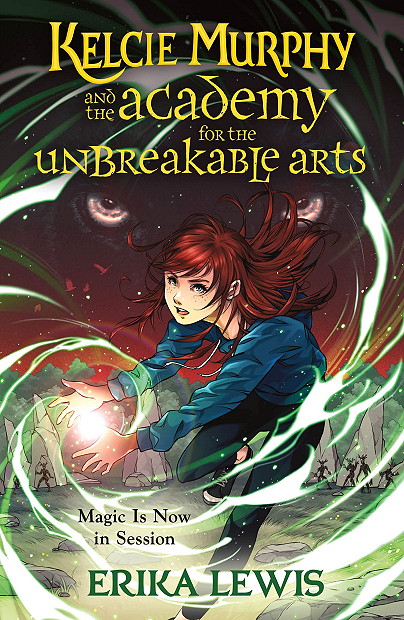 Brimming with Celtic mythology, action, and danger, Erika Lewis’s Kelcie Murphy and The Academy for the Unbreakable Arts introduces readers to a new kind of magical school and a warrior who must choose with which side of an epic battle her destiny will lie.

The Otherworld is at war. The Academy for the Unbreakable Arts trains warriors. And Kelcie Murphy—a foster child raised in the human world—is dying to attend.

A place at AUA means meeting Scáthach, the legendary trainer of Celtic heroes. It means learning to fight with a sword. It means harnessing her hidden powers and—most importantly—finding out who her parents are, and why they abandoned her in Boston Harbor eight years ago.

When Kelcie tests into the school, she learns that she’s a Saiga, one of the most ancient beings in the Otherworld. Secretive, shunned, and possessed of imposing elemental powers, the Saiga are also kin to the Otherworld’s most infamous traitor.

But Kelcie is a survivor, and she’ll do whatever it takes to find her parents and her place in their world. Even if that means making a few enemies.

Erika Lewis grew up in Alexandria, Virginia, spent summers with her grandparents in Worcester, Massachusetts, and currently lives in Los Angeles, California. With a passion for storytelling set in magical places, she spends as much time as she can traveling. When she’s not writing, she can generally be found scribbling notes in a blank book while wandering through abandoned buildings, all kinds of museums, and graveyards.

A graduate of Vanderbilt University, her list of credits straddles the comics and novel space, including Game of Shadows from Macmillan’s Tor Books, Firebrand and Acursian from Legendary Comics, #Guardian from Awesome Media & Entertainment, and The 49th Key from Heavy Metal Publishing. The Color of Dragons is her debut YA, coming from HarperTeen October 19th, 2021, and Kelcie Murphy and The Academy for the Unbreakable Arts is her middle grade debut coming from Starscape/Macmillan March 1st, 2022.

“The exit is that way,” Kelcie said, shooting her thumb over her shoulder.
“The car is parked in the back. We’re going out by way of the basement,” Grimes explained.
That sounded ominous. Was Mrs. Belts waiting for her with some made-up evidence? Kelcie ground her fingernails into the back of her clasped hands in her pocket. She was going to end up at the station, or worse, juvenile hall again.
Every school group they passed gawked. Fingers pointed. Teachers shifted their students, pressing them against the walls, moving out of the way.
Humiliated, her head aching beyond belief, Kelcie raised the hood on her sweatshirt and lowered her eyes to the floor, hoping that, at the very least, she would be able to leave Boston. Having been abandoned here, Kelcie should’ve known bad luck would follow her the minute she returned.
It wasn’t until Officer Grimes shouldered an exit door with a sign on it that said Employees Only that Kelcie’s internal alarm bells first pinged.
“We’re not supposed to be back here. Why can’t we go out the front and walk around the building?”
“It’s fine, Kelcie.” Blizzard tossed her a placating smile. “Just do as you’re told.”
Kelcie had no reason not to trust Elliott Blizzard. He had never lied to her before. In fact, he was the most frustratingly honest person in her life. So, you were abandoned, he said the day they met. You will not only survive this, but be stronger for it. Some of that was true. Kelcie learned to take care of herself, never to depend on anyone for anything, but that didn’t mean she liked it that way.
Grimes padded along with authoritative, determined steps, as if she knew this museum inside and out. She led them through a maze of short corridors, passing several small offices, garnering confused stares from museum staff.
“Excuse me!” a man called as they rushed by. “Are you lost?”
he hollered. His chair squeaked, swiveling, and his footsteps plodded after them, but not before Blizzard forced Kelcie to take a sharp left, and then another into a supply closet.
“We’re going the wrong way,” Kelcie exclaimed, stopping. “Wha—”
Grimes slapped a hard, frigid hand over Kelcie’s mouth as Elliott hoisted her off the floor. Stunned and panicked, Kelcie thrashed, yelling muffled cries for help, but the man’s steps passed right by.
“We’re not going to hurt you,” Elliott whispered into her ear.
Officer Grimes’ frosty breath tickled her other ear. “Unless you don’t cooperate.”