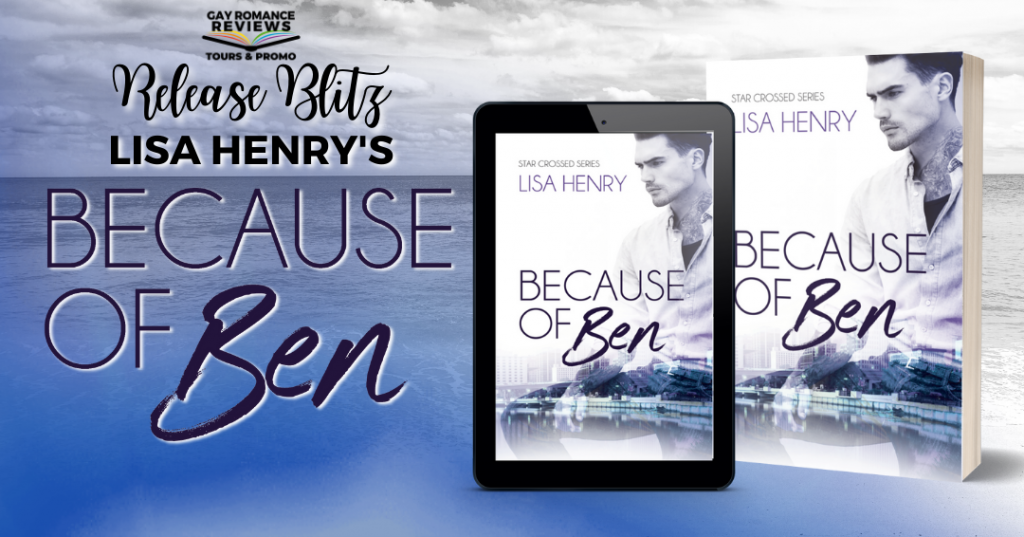 A big glittery welcome to the Release Blitz for Because of Ben by Lisa Henry!!! I am so excited to be part of this tour! Bands, fame, religion, romance, and more! Yas!

For today’s post I got several teasers, an exclusive excerpt, book/author information, AND a giveaway. Yes, this post is packed!

A big congratulations to the author on their book releasing today, I hope you have an amazing day.

Let’s get this party started. dances 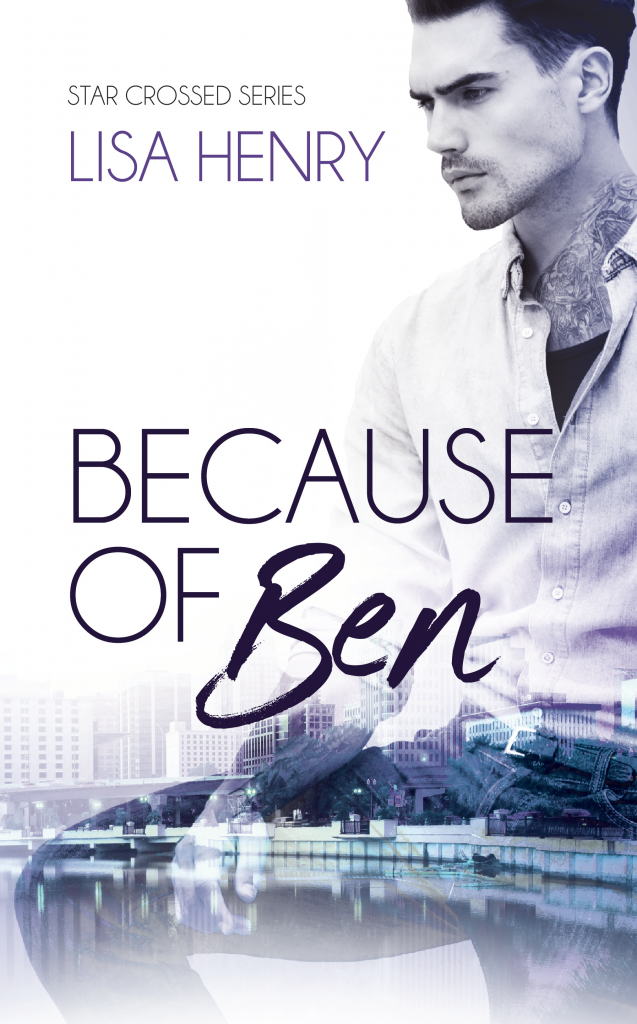 Marco Chase is the lead singer for Static, one of the world’s most famous and successful rock bands. Marco’s bad boy rock star image isn’t just one he’s cultivated for his fans—it’s Marco all over. Marco’s past is full of one night stands, bad decisions, and blackouts. Marco never saw a cage he didn’t want to rattle—and from the moment he lays eyes on him, he really wants to rattle sweet, innocent Ben Selden’s cage.
Ben Selden comes from a fundamentalist Baptist family. Ben is struggling under the weight of knowing that he’s gay, and a lifetime’s teachings that tell him that his God will condemn him, and his family reject him, if they ever find out. With a future he doesn’t want already mapped out for him, Ben’s at a breaking point when he meets Marco.
Marco’s teasing, flirting, and obvious interest awakens a hunger in Ben, and he knows this might be his only chance to act on his attraction to a man—if he’s brave enough to risk his future, and his family, to take it. He doesn’t expect Marco to be his savior, but maybe a savior isn’t what Ben needs—maybe he just needs someone to believe in him enough that he’s willing to save himself.
Because of Ben is the second book in the Star Crossed series, where regular guys meet famous ones, and sparks fly. 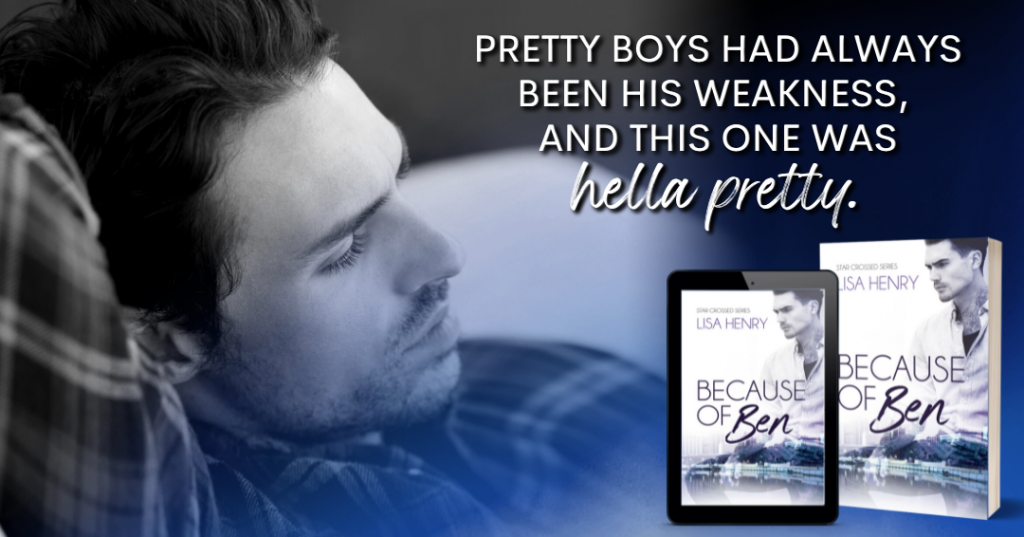 Lisa likes to tell stories, mostly with hot guys and happily ever afters.
Lisa lives in tropical North Queensland, Australia. She doesn’t know why, because she hates the heat, but she suspects she’s too lazy to move. She spends half her time slaving away as a government minion, and the other half plotting her escape.
She attended university at sixteen, not because she was a child prodigy or anything, but because of a mix-up between international school systems early in life. She studied History and English, neither of them very thoroughly.
She shares her house with too many cats, a dog, a green tree frog that swims in the toilet, and as many possums as can break in every night. This is not how she imagined life as a grown-up.
Lisa has been published since 2012, and was a LAMBDA finalist for her quirky, awkward coming-of-age romance Adulting 101, and a Rainbow Awards finalist for 2019’s Anhaga.
She also has a Facebook group where you’ll be kept in the loop with updates on releases, have a chance to win prizes, and probably see lots of lots of pictures of her dog and cats. You can find it here: Lisa Henry’s Hangout. 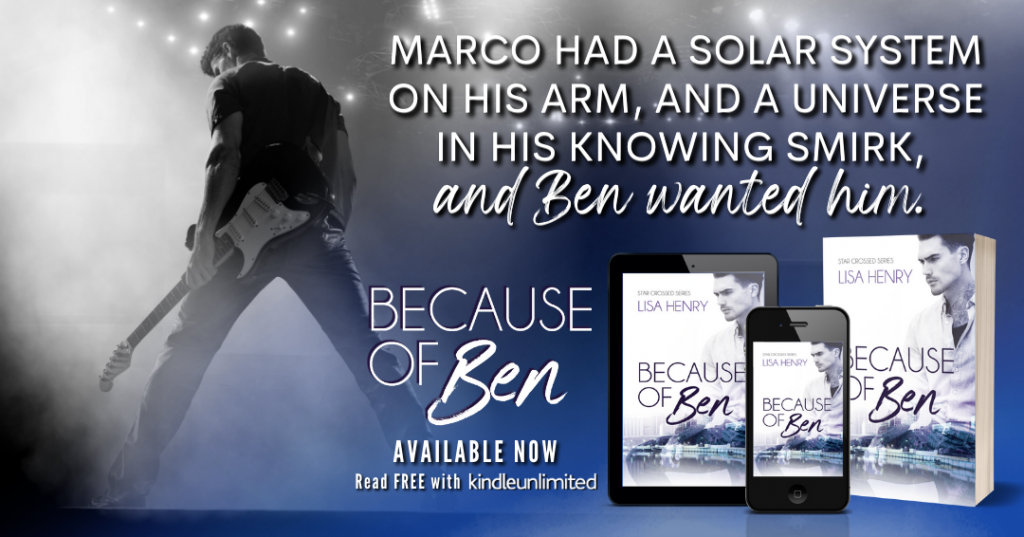 In the dining room, Marco veered straight for the coffee. If he couldn’t get his nicotine fix yet, he sure as shit needed his caffeine fix. Then, balancing his coffee cup carefully against the rim of a plate, he loaded up on bacon and toast and retreated to a table at the back. He unhooked his sunglasses from the neckband of his T-shirt and put them on. He was a rock star. He was supposed to look like a douche.
The dining room wasn’t too busy. An older couple, a woman in business attire, a couple with two young kids. A guy in checkered chef’s pants replacing the trays in the bain-marie.
Marco wiped his greasy fingers on his jeans and wondered where the closest place to buy cigarettes was. He’d ask at the desk when he extended his booking. Then he’d buy a pack and sit his ass down on one of the planters out front and smoke the day away. Because what else was there to do in Dayton?
He googled local tattoo shops. Was it cheating to see another tattoo artist on the side? Probably. When a guy pierced both your nipples, you bonded. Yeah, he’d wait until he was back in LA and see Jimmy again.
Ha! And his parents worried he couldn’t commit.
A bunch of young people in matching blue polo shirts and red lanyards came through the door. His first thought was multi-level marketing. They all looked like they’d drunk the Kool-Aid or the protein shake that cured cancer or whatever shit they were selling. As they lined up for the buffet, he saw that the shiny laminated cards hanging off their lanyards had crosses on them.
Marco almost recoiled like a vampire out of instinct.
There had to be thirty of them, all young and earnest. His gaze caught on a leggy redhead who looked like she might want to let down that high-pinned ponytail of hers with the right incentive, but then he got a look at the guy standing behind her in the line.
Pretty boys had always been his weakness, and this one was hella pretty. He couldn’t be more than twenty or twenty-one. He had bone structure as fine as a girl’s and light brown hair cut in a choppy style. He had pale skin, with a smattering of imperfect freckles across the bridge of his nose. Marco was too far away to see his eye color, but he imagined gray or blue. The guy had a full mouth that looked made for lazy kisses if Marco was feeling sweet, or messy blowjobs if he wasn’t. And something about that neatly tucked polo shirt and perfectly straight lanyard made him want to put the guy on his knees and get him good and dirty.
He grabbed his plate and headed for the buffet again. Squeezed right into line beside the guy because he’d guessed they’d all be too damned polite to call him out on it. He glanced at the guy’s lanyard.
Ben Selden.
Lancaster Bible College.
Tri-State Inter-College Faith Conference.
“Hey,” he said.
Pretty Boy Ben lifted his wide-eyed gaze from the tattoos curling out from underneath Marco’s sleeves. “Good morning.”
“You don’t mind me cutting in, do you?”
Ben flushed. “Uh, no, you go ahead.”
Marco rolled his shoulders, tightening his shirt across his torso. He didn’t miss the way Ben’s gaze darted to his nipples and to the barbells pressing against the thin fabric of his shirt. He also didn’t miss the flush climbing Ben’s throat as he figured out what they were.
He reached out for some more bacon and used the tongs to wrestle a few more pieces onto his plate. Then he winked at Ben and stepped out of line again. “Thanks.”
Ben nodded and swallowed as Marco sauntered away.
Marco grinned as someone else in the line whispered, “Do you know who that is?”
Satan himself probably, according to this crowd, but it was nice to know that the Jesus kids had heard of him, even if they probably only bought his albums to burn them. Like Marco gave a fuck. As long as he got his cut of royalties, he didn’t give a shit if people shoved his merchandise up their asses. He’d always been a pragmatist.

This Release Day Tour was organized by: