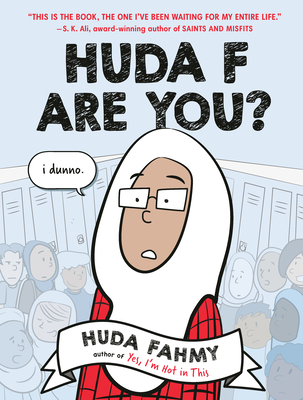 A new Huda Fahmy book in which we explore identity, making friends, and surviving high school!

I was just so hyped when I learned that Huda Fahmy had a new book coming out! I just ADORE her other two books. I just had to have this one. So the waiting game began, haha. Especially given how much issues Amazon is having lately. But eventually the time was there. Eventually Amazon had it! And then I could read it! dances

In this one we hop to the past and get to meet Huda when she was a teen. A girl who at first was the Hijabi girl but then became one of the many when she went to a school with many girls wearing a hijabi. We see her question who she is along with trying to get through school. We see her make friends (but are they really her friends or did she just want acceptance), we see her struggle with her parents, well mostly her mom. XD I just had both a laugh and a OMG what when the mom asked if Huda was using drugs because of a lower grade (ONE lower grade).

It was really interesting to read and I got flashbacks to when I was younger. OK, without the hijabi, but definitely with the same feelings on how to fit in and who one is. It isn’t the easiest and sometimes you see others who just seem to have figured it out already.

I was definitely uncomfortable and unhappy with how everyone seemed to make something out of Huda’s name. I mean, I get that maybe the first time you do it wrong, but after that you shouldn’t call her Huupa or Houda or Honda or whatever else variation ran amok.

There is also talk about racism (a teacher and how the school reacted to someone who was making a radio) and religion (asking boys out yes or no, and there is halaqa). For the first one, shocked and that a teacher could just get away with that (so I was rooting for Huda or anyone to find a way to sort that one out). And for the second one, interesting. It reminded me of bible studies I followed.

I also love the pun in the title!

The art was fun.

All in all, I hope we get many more books from Huda Fadmy, I want more at least. I would recommend this book to all.