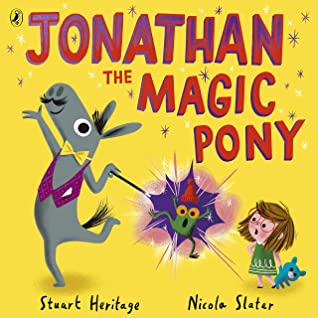 Meet Jonathan, he is a magical pony… but what will he do when his tricks keep getting wrong?

I finally had the chance to read this book, I read it in Dutch but will be writing my review in English because this book was just so much fun, with humour, tantrums (for good reasons), and a lot of magic.

In this book we meet the Magical Pony named Jonathan. He is quite a big star and he can do real magic! Yes, he isn’t just some fake magician with fancy tricks, he has a real wand and real poofy magic. The animals love it and his tricks. I had quite a laugh at seeing what Jonathan was getting up to and what he could do. But OH BOY, when the little girl and her bear came up… I knew that something was going to happen. My heart just broke for the girl, I would have done the same as she did in the book. I also have a bear that I just love so dearly and as a girl I was even more attached to it, so having it just mysteriously disappear and the tricks don’t bring it back? Oh boy. You don’t want to be anywhere near me. Despite that it was heart-breaking it was also hilarious to see what Jonathan magicked up, really, all sorts of things are coming back into the world. Plus, I loved that he kept trying. That he didn’t give up despite the whole desperateness of the situation.

The ending? Bit conflicted~ On the one hand I laughed because it was just so random and out of place, but also fitted just perfectly (yes, I am confusing XD). On the other hand I wish he had said a bit more sorries and also decided to try just a bit harder to practice with magic.

Be sure to check the endpages as well (both the beginning and the ending). They were just the greatest and I love how they fitted with the story.

The illustrations by Nicola Slater were just the best, she really captures the magic and the emotions when things go wrong. Love it!

All in all, I love it. Would recommend it to all! Magic, drama, and a magical pony.