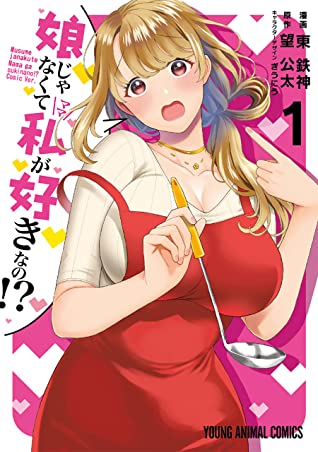 A hilarious manga! What happens when the boy you thought was perfect for your daughter…. actually liked you!!

I was looking for something new and hilarious to read and I bumped against this one. Of course I had to try, yes, I was a bit weirded out by the fact this guy was just 20 and she was 34. But I was also curious.

In this one we meet single mom Ayako, she is mom to Miu. Well, she adopted her when she was 5 and her parents died. I really liked Ayako and loved her reactions in this volume. I loved that she was the only one who decided to take care of Miu. And that she was fully dedicated! But I also loved that despite this she kept working. When someone mentioned she just started working back when she said yes to Miu, I thought she would turn housewife. But thankfully, she figured something out with her boss and she has been working hard while Miu was at school and other places. I was so proud of her! It should be more standard that moms can also work, but I see it too often in manga and anime that women tend to give up their jobs.

Ayako is just the cutest and I love how much of an airhead she is. She seems really put together, but when one thing tip the balance to another point she is just lost and becomes confuzzled. I can imagine her reactions towards Takumi. I mean, she has always thought he would get married to Miu, that he would be the one for her. That he would join the family like that. She had these big imaginations about it. And then she finds out he wants her, I can imagine she is all frazzled. And so I had a laugh at all the things she tried to show him the reality of being with an older woman. And yes, these plans are hilarious. Especially the last one. XD

I was pretty off put by the fact that he has liked her since he was 10… and that this love at first sight happened because they bathed together. It was a totally innocent bath. Takumi was cold and soaked to the bone by the rain and Ayako, who has a kid, didn’t think too much of it to just also dive into the bath as she was also cold. But apparently how Ayako looked and what she said stayed with him and he fell in love. Yep. I was happy that Ayako was pretty put off about that as well. Like, WHAT? NO ><.

But I did warm up to Takumi and I loved that he waited until he was 20 before confessing his love. It was pretty adorable and sweet that he didn’t waver from his first love. I love that he could also understand Ayako’s opinions on the matter and that he was respectful. That he didn’t go too far, that he let her think about it, and that they even had conversations on the matter. Because he really wanted to give this a chance.

And I like that eventually Miu and Ayako had a conversation, or well ish, about it. Miu is just hoping that her mom gets someone, hoping that she finds happiness. She is happy her mom of course put aside some years for her, but now that she is 15, almost an adult, she just wants for her mom to be happy. I found that so sweet. Miu seems a bit stand-offish at times so this moment and some others made me smile.

The art was quite good. The artist was really good at capturing some great expressions, Ayako as the winner in the funny and OMG that facial expression.

All in all, this is one manga I want to continue because I need to know if Ayako and Takumi get together. I want to see some dates. Yes, I am rooting for these two and I hope that it works out despite the huge age difference.