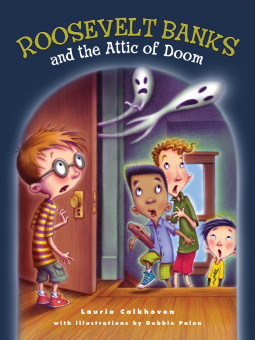 Haha, this turned out to be something different than I had expected from the blurb + cover! I had expected real ghosts and real ghost-busting moves, instead it is just about a boy who is deadly afraid of the attic in which he will have to live soon. And instead of his parents taking his fears for real and talk about it, they just shrug it off and thus causes the boy to be even more panicked. In the end I did like what I got and that was summer, friendship, revenge, and family.

In this one we meet with a president obsessed family, well, mostly the dad it seems. Our MC is a boy named Roosevelt. Yes, really. He is a small boy with great friends, but when he thinks about the summer he thinks it is going to be the SUMMER OF DAD. Instead, due to pregnancy (which had me laughing as he thought his mom was just becoming fat) there is renovations to be held so that the baby can move into Roosevelt’s room. Roosevelt in the meantime will be moved… to the attic. The attic which he absolutely HATES. Throughout the book we read why and we see his plans. From just sleeping outside to a big fat plan that had me shaking my head. Don’t do it Roosevelt!! Don’t!

I loved seeing Roosevelt with his friends, they were quite the group and their friendship was just great!

There are also cute little baby bunnies that had me aww-ing each time we saw them. Yes, I would definitely be like Roosevelt’s sister. Hug them 24/7 if possible.

I wasn’t a fan of the twins and I was amazed that none of the adults had an idea what was going on. Thankfully, there is a nice part with revenge coming up and I was cackling in delight. These boys deserved it and I hope they will stop with their crap.

I also liked the art! It was quite nicely done.

All in all, despite not getting entirely what I wanted, I was happy with this book and I flew through it while waiting for my booster shot and then the 15 minute wait after that.