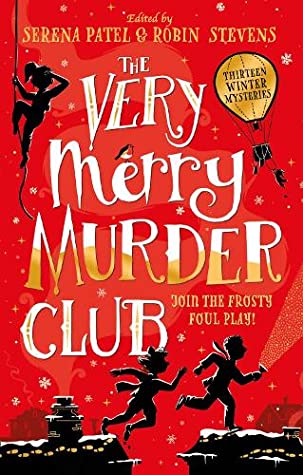 This was SO difficult not to read but I really wanted to save this boy for Christmas. And I managed to do that, but I had to hold myself in many a time.

In this delightful book we get 13 short stories by various authors. There is mystery, simple and harder, there is murder, stabs and poison. Most of the stories take place in the now with a few exceptions (and one didn’t work). I loved how diverse the stories were featuring characters from all colours, with various reps, with LGBT feelings or parents, and more. It is such a delight and it made me smile. I loved the various mysteries as well, two featuring my favourite setting… snowed inn, um, in. XD It was great how some of the mysteries were solved within a heartbeat while others took a tad longer. I do have to specify that normally I am not the kind of girl who likes the easily solved ones or where the character just magically knows, but it worked in this one. It was just right.

I loved how each story was presented as if it was a file in an archive of The Very Merry Murder Club.

My favourite stories would be: Scrabble and Murder, Ice and Viper, and Shoe-Dunnit (with the fab quote: Herriot laughed, bemused. “You’re an old soul, aren’t you?” “No, just autistic.”).

With the story about the dancing, I wasn’t sure how I felt about them taking the trophy/swapping it. It just seemed too far for me. I would have rather had them solve the mystery and get things fixed.

There were three stories I wasn’t sure about. The first was It’s Snow Crime. Technically a good story, however it felt like it was either part of a series or just a part of a whole book. There were things happening that had me confused, like with the villain, or how grandma was a spy apparently? It just didn’t work for me. Then there was Frostwilds which I skipped after reading a few pages. Why did I skip? Because while it had that wintery setting… it just didn’t fit at all with the tone or the mood of the book. Suddenly we are transported to a magical winter world with a monster lurking around. Then there was the one about the funhouse. Again, fun to read at times, but I don’t know because it was more fantasy/more magical and had a very inconclusive ending I just wasn’t a fan of the story.

There are also various reps included in the book and I have to applaud for the autism and the ADHD rep. Those were just perfection.

I loved the illustrations, there style was just so much fun, though I just wish there were more of them and not just one per story. Haha.

So as you can see, I had tons and tons of fun reading this book. It was a perfect read for Christmas!