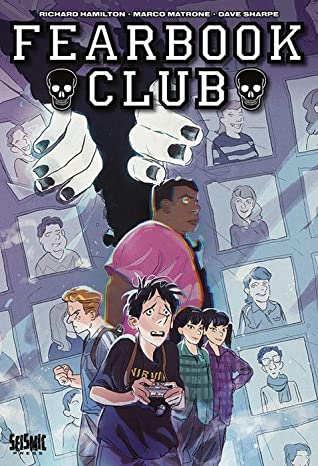 I just love horror and I love it when the horror is in graphic novel form. So I just had to request this one!

I was quite interested in the Yearbook Club. I only know of the club thanks to YA novels and series. We never had something like that in high school. But it is something I do like reading about because it just seems so much fun to be part off. To make something for people and give them some fun memories. It was a bit of a shame that the Yearbook club in this graphic novel seemed to do not much. Mostly they seemed to just talk and have fun or try to get through the time they have.

But the peeps in there, well, except for some guy named Press, were fun. I especially loved the twins and I love how Whit just knew who was who which shocked the twins. I can imagine, haha. All this time everyone just confuses them for the other and then there is this new kid who just knows. The twins were just so silly, over the top, and fun, and I loved how accepting they were of Whit (especially if you look at Press’ his reactions).

Whit was an interesting kid and I loved that he is so much into photography and then especially the old-school variant of it. With a dark room, a Leica, and all that. I loved that he didn’t give up when he saw spooky things happening in his photographs, instead he went to find help and went to seek out the truth. I did like that while he was so brave, you could also see he was scared poopless. And I love that because really? Who wouldn’t be scared when you see dead people everywhere? And you have no clue if they are good or bad? I was really rooting for him to figure things out and get the school free of whatever was haunting it.

I just wasn’t a fan of Whit’s mom all the time. She was just too overprotective, and we do learn why, but still. Your kid isn’t a baby any more. Let him be a bit more free.

The haunting stuff was good, though maybe it could be explained just a bit more and not just feel like a random grab out of the thin air. I mean, I had no clue about the culprit, and I still wonder what happened to them truly.

The art was pretty good, I liked the style. The ghosts were delightfully frightening and scary!

I was frankly very shocked that the school did NOTHING. I mean, for many many years, decades even, each year a kid just disappears. Just ups and vanishes. And no one does a freaking thing? No one thinks to just demolish that creaky old building? I mean, it was already on the brink of falling apart when Duncan disappeared, but 30 years later it is even more a wreck. It just seemed very odd, as if people did know something but just didn’t care.

I also found it odd that only Duncan

All in all, despite those two things mentioned above, I had fun reading this one! It was a fun and at times scary read.