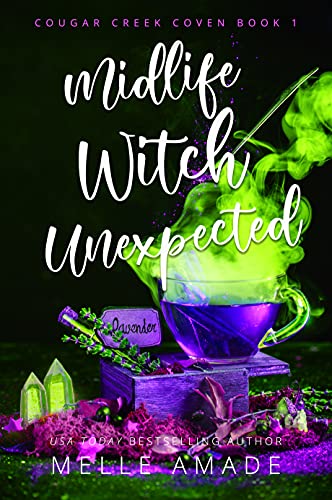 A delightful and hilarious book about a woman in her forties, freshly divorced, who finds out she is a witch and magic and other paranormal business is very real.

I have had my eyes on this book for a few months now (just a bit before it came out), but I just didn’t get to it. But now I did and boy I am happy I did because this was fun to read.

In this one we meet Mae, a woman in her forties who just went through a divorce (her husband was gay…..) and she is eager for a new beginning. Though I do think that she hadn’t expected to get a new beginning with magic, a coven, and vampires. Yep, you read that one right. Apparently her family is the big one in the region and she is next in line.

So in this book we see Mae get used to life as a divorced woman and make a new start, get used to the situation of being a head priestess, find out her magic, and fight and kick out vampires, struggle with dark Fae. Oh man, I just love the world and I adore that there are even gods and the likes. I want to meet those! I thought this one would just be magic, some witchy stuff, maybe some dead zombies. But oh no, there is much more and I am totally into it! I also loved reading more about The Hayes and all they did in the past. Would definitely love a prequel book featuring The Hayes from the past.

Mae was just a fabulous character, though I wanted to give her many hugs given everything that happens in this book. And I was also rooting for her because she had to figure out things, fast.

I wasn’t so happy with how everyone just didn’t care about her privacy at all. Maybe it is cool for you to just walk into someone’s home, but I think that is just utterly rude and I could very well understand that our MC was just not comfortable with it. I mean, on her FIRST day someone is just cooking up stuff along with their teen kids in tow. WHAT the actual HELL? I get that you were tenants in this house (and of course we learn the truth about that) but that doesn’t mean you can just barge in when someone new is there. And people just kept doing it. Like, really? She is clear about it, just don’t do it. Respect her. ARGH!

I also wasn’t such a fan of how everyone kept treating her like a child. It is not her fault that she never knew about the magic or the heritage. She cannot help it that she is thrust into this role and that she has to accept it or else. Instead of constantly being meh towards her (especially looking at you Trina) you could be supportive and excited that she is learning so fast and that she is already making up her own spells. That she is working hard and is open to all these things. That she is already thinking of the future, just in case. Mae is just such a wonderful woman and I loved how quick she tried to master the magic. She deserves way more praise.

I loved her and Branson together, though I was a tad frustrated when she learned of his true job and just decided to be rude/mean towards him. Yes, he may have had to specify before have sex with you, but still, come on girl. He likes you. You are clearly into him. The sex was mindblowingly good given the descriptions XD. Just stop being so dere dere and get on with him. Get close and comfy! Here is a man who finally is respectful to you. Finally a guy who truly likes you.

The later part of the book was just fantastic. A kidnapping, a kick-ass scene that had me rooting for our MC so much, and then some extra surprises that had me snickering and that I found to fit perfectly with the book. I definitely wanted more. More MORE!

I would recommend this book to all, we need more MCs who aren’t the youngest any more. Yes, I had some issues with how people treated our MC and how privacy was treated, but I am happy I read this book because I also had tons of fun and I just love having a MC of this age and see her do something awesome with her new life.