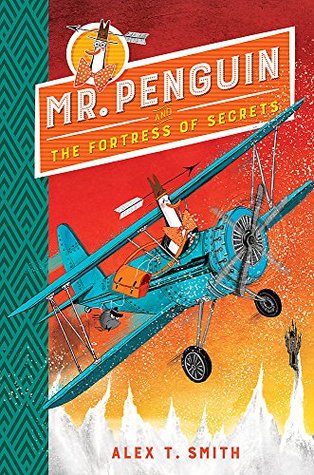 Mr. Penguin is back! This time we get mystery stones, secret fortresses and a ton of hamsters!

First up a BIG BIG thank you to Santa, aka my husband, for gifting this one for Christmas! I am so hyped to get further in this series as the first book was just so much fun!

In this book we start off with a strange letter addressed to Mr. Penguin and from there we go to Mr. Penguin who is on a mission! A very exciting one! And then things happen and it ties all with that first letter and I was just absolutely squeeing in delight because I just adored how coincidentally it all just clicked together, even if Mr. Penguin is a tad confused. XD

The village has a problem. The secret big fortress on the mountain is being lived in. Hamsters and other rodents are disappearing. The yearly contest cannot go on (yes, less terrible I know, but for these people that was a big thing to look forward to). It is up to Mr. Penguin to figure out how the animals are stolen and what is happening at the fortress and I was all there for it! It was really exciting, but also featured enough moments that had me laughing so hard. I just adore the characters, especially Colin with his magical disappearing notebook. I love that we meet new characters and I do hope that we get to see them in other books because I don’t want to leave them.

I am normally not a fan of giving the spotlight to villains, I just don’t like villains so much to get up and close with them. But I did quite like the diary parts that we got in this one. It gave a glimpse into the villain, and besides I couldn’t really see them as a big villain. More as a kid who was treated crappily by their parents because of their powers. 😐 It is no wonder they went craycray.

I love that despite them getting away with the stone and seemingly going into another adventure, the stone is still important. There is someone lurking in the shadows of Schneedorf-on-the-Peak, someone with the same symbol as the people in the beginning. I was just very eager to see how it would all tie together and if this mysterious stranger is good or.. evil.

The ending was just fab! It made me wonder if it would all be good in the end, it hypnotised me, it made me laugh, smile, giggle, and I was just delighted to see it all tie together. I am also glad for the villain of the book (and yes, I won’t be saying any more than that, teehee).

The illustrations were once again AMAZING. I love his art so much and I keep being stunned at how detailed it can go. The cogs and the machinery for instance, holy wow. It is just amazing and I so would love a print of it.

All in all, a fantastic, hamsterific, adventurous story with great new characters (both villains and non-villains) and I just couldn’t stop reading. I had to finish it. I will definitely be getting the next books, though I am not sure if it will be soon or if I will be waiting until my vacation in August. Would make fun summer reads~